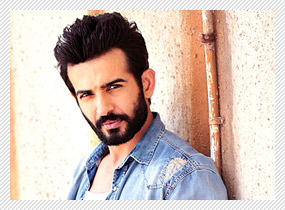 Jay Bhanushali has made a successful debut with Hate Story 2 which has minted enough money over the first weekend itself to qualify as a success. The fact still remains though that the revenge affair is basically centered on the face-off between the protagonist (Surveen Chawla) and the antagonist (Sushant Singh) while Jay has fitted primarily in a strong supporting part.

The wait isn't going to be much for the leading man part though, what with Desi Kattey promising to mark his arrival in the world of Bollywood as a hero who learns to differentiate between a 'desi katta' and a 'videshi pistol', hence resulting in changed priorities in life. Same could well hold true in his professional career as well as he moves on from being in the background to much more in the forefront, what with director Anand Kumar (coming after Zila Ghaziabad) seeing none less than Arjun Kapoor in him.

"What I like about Jay is the kind of silent and passive aggression that he brings in his act," says Anand, "Before finalizing Jay I had met a lot of newcomers. Some looked good and some acted well. However I wasn't finding anyone who could look the part and also be believable as a performer. Jay fitted in the bill as he is such a fine actor. Just like Arjun Kapoor is standing out in the new breed of actors, even Jay will make his place in the industry after Desi Kattey."

Arjun had made his debut in Ishaqzaade which again had violence as its backdrop with love battling it all out. Now Desi Kattey too is set in a violent land though this time around it is not love but patriotism coming to the fore (Jay's character reaches Olymics as a shooting champion). Just like Arjun, who has modeled his act as per the requirement of the stage and setting, as was the case from Ishaqzaade to 2 States - two diverse films, even Jay has gone through a complete shift when it comes to his stint with hosting in television to his Bollywood debut Hate Story 2.

"Yes, Jay's character is very soft and nice in the film. He carries this good combination of chocolate boy looks and rawness in an overall appeal that sets him apart. See, there are so many newcomers coming in today who are way too stylish. Kahin se characters lagte hi nahi hain. They have built their muscles and try to pass off as an actor. Jay didn't want that approach for Desi Kattey. He argued that as someone with an impoverished background, how could his character justify an imposing physique? Not that he didn't pick on that mode but it was only in the film's second half when his condition improves," details Anand.

No wonder, the man who has boasted of some muscles to showcase on screen for two and a half decades, Suniel Shetty, has come back impressed too.

"Anna appreciates Jay a lot. He too feels that amongst the newer lot of actors, he would be the one to deliver for sure," says Anand.

For someone who has directed the likes of Sanjay Dutt, Vivek Oberoi and Arshad Warsi in his last, Anand would indeed be hoping for the same as well.