Actor Abhishek Bachchan recently revealed that it was actor John Abraham who had taught him how to ride a bike during the shoot of Dhoom. The actor said that his parents, Amitabh Bachchan and Jaya Bachchan, did not let him ride a bike due to safety concerns. Nonetheless, the star had to learn it from John when they were shooting for Dhoom in 2004. 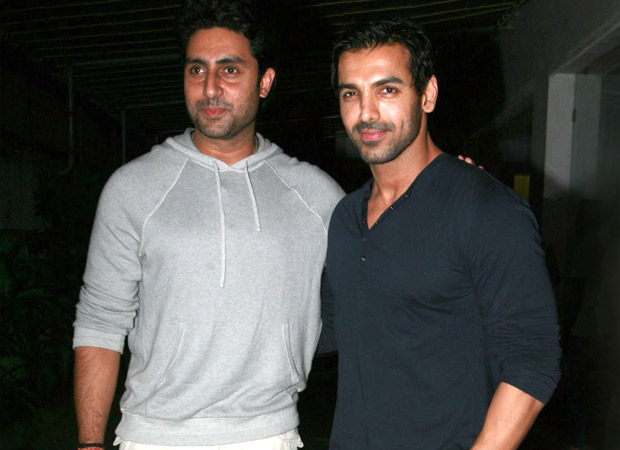 Bikes were a massive part of the film, which featured Abhishek as a police officer Jai Dixit, and John Abraham as a gang leader Kabir Sharma. As the movie had numerous scenes and stunts on bikes, the cast was required to learn it before the filming. Abhishek reminisced that Uday Chopra, who played a bike racer turned police officer in the film, went to England to equip some skilled stunt riders. On the other hand, John took the accountability of teaching him how to ride.

Abhishek told Mashable India, "I didn't know how to ride a bike. I'd ridden a bike in a film right before that but they put me on a trolley and took it. My mother and my father never allowed me to ride because they were scared. During the shooting, John taught me how to ride. John used to ride with me and teach me. He was unbelievable. He used to live in Bandra, he would ride back to Juhu with me. He said 'baba, just remember. You have to be very responsible.' He is Parsi so he knew how to disassemble the bike and said 'this (chassis) is what you are riding on.' He was so safe and he taught me everything and I was so confident after that."

Abhishek shared that his co-actor John used to motivate him with chocolates when he would to perform well in the scenes involving bikes while they were shooting for the second part of the film in Goa. He recalled, "The first night at the hotel his valet came to us and offered us chocolates. And we felt ki yaar, 'kya banda hai yaar John, so sweet.' He was like 'you did a good job today.' The next day he was like 'baba great job, baba fantastic,' and the same chocolates. I'm like 'dude he is slowly becoming my favourite person.' By the end of the schedule, I had put on 7 kg. I said now I realized what he was doing. He gave us chocolates and himself was in the gym."

Both Abhishek and John have also worked together in the 2008 film Dostana, and are close friends. On the work front Abhishek was last seen in the film Dasvi along with Yami Gautam and Nimrat Kaur. John was last seen in Attack along with Jacqueline Fernandez and Rakul Preet Singh in pivotal roles.

Also Read: EXCLUSIVE: Abhishek Bachchan praises Aishwarya Rai Bachchan – “She has managed to traverse some of the most difficult times of her life with utmost dignity and grace”