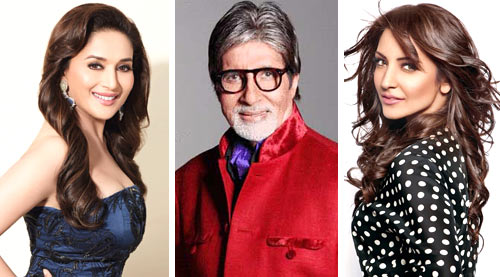 1. Madhuri Dixit's comeback: She came , we saw, she flopped. All the buildup in the media about Madhuri's comeback proved to be a dud. Both her 'comeback' films Dedh Ishqiya and Gulab Gang bombed. At the end of the year Madhuri 'Magical' Dixit was selling chawanprash on television. And running a dance academy on the internet. Tak dhin tak dhin...dhaaa!


2. The Big B's fictional debut on television: Hyped and promoted as a game-changer Yudh was a shuddh fiasco. The Big B's fictional debut on television failed to connect with viewers. The series went downhill from Day 1. The climax was a joke. Shame on the team that subjected the Big B to this tortuous tamasha. For the man who re-invented non-fictional television entertainment Yudh was disservice of demoniacal dimensions.


3. Anushka Sharma's 'lip' of faith: Going under the knife is no longer fun. Anushka Sharma's lips were the biggest anatomical aberration since poor Koena Mitra's face went the Michael Jackson way. Anushka bravely spoke about her 'lip' of faith on Twitter explaining that she got her honth hotted for her role in Anurag Kashyap's Bombay Velvet. We thought she wanted to just have more lip-space to blow kisses at Virat Kohli.


4. Sholay in 3D: Whoever thought of turning one of Bollywood's 5 most beloved film into a 3D experience deserves the award for the most imbecilic idea of the century. It was like wall-papering the Taj Mahal or lip-enhancing Madhubala for her role in Mughal-e-Azam. No wonder director Ramesh Sippy protested. One shudders at what techno-wizardry they would think of next. Maybe Mehboob's Mother India with Sunny Leone's face morphed on Nargis?


5. Motion Capture 3D technique in Kochadaiiyaan: 3 years in the making, approximately Rs. 90 crores spent on the special effects, this was meant to be our own Avtar and also Rajinikanth's comeback film after a health recuperation period of nearly 4 years. But what was this? An animation film by a fancy name? Motion Picture 3D seemed like a smokescreen for a badly-done animation film where Deepika Padukone looked like Gauahar Khan and Rajinikanth looked like.....oh well, Rajnikanth doesn't look like Rajinikanth anyway.