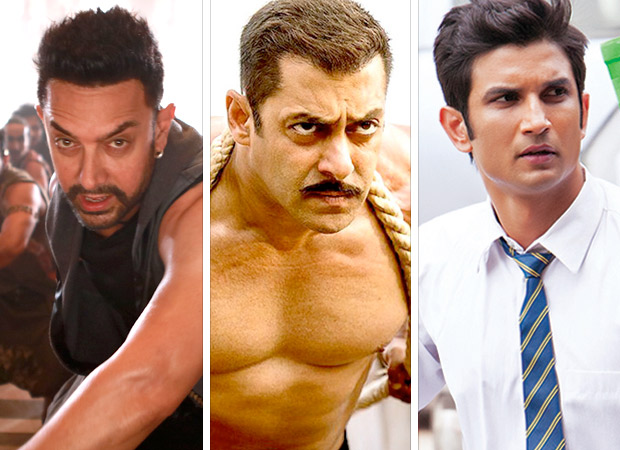 2016 has come to a close and the year has been decent for Bollywood. While there has been a biggie at the top [Sultan], another is all set to emerge as a huge Blockbuster is Dangal. There have been seven 100 crore grossers in 2016 and a couple of hardcore multiplex hits [Neerja and Kapoor & Sons] feature in the list as well. Let's take a look!

Dangal is a sports based film to have done well in 2016 and while it is making brisk progress towards many a milestone, one waits to see how much further does it go past the Rs. 300 crore mark. Aamir Khan has showed yet again that his name spells class and he has chosen a new subject for this film of his which stays miles away from being a typical hero-heroine affair. This film, just like Sultan, deals with wrestling.

With Dangal upping the ante, the Salman Khan starrer Sultan has now moved to the second spot, though it was the first release of 2016 to go past the Rs. 300 crore mark. In is the second All Time Blockbuster that Bollywood has seen in 2016. The film smartly integrated a love story with sports theme and with Anushka Sharma being much more than just Salman's accompanying partner; it was a largely fulfilling experience.

This is the first ever instance in the history of Bollywood that each of the three films at the top deals with sports. Third film in the list is M.S. Dhoni - The Untold Story which has cricket as its central theme, what with Neeraj Pandey bringing on the biopic of M.S. Dhoni. The manner in which he directed the film and Sushant Singh Rajput literally lived the role makes it one of the most memorable films of the recent times.

Reality is in, and that is pretty much apparent with each of the films in the list so far either being inspired by real life events or based on real life characters itself. Airlift is no different as it told the true story of the largest evacuation ever in the history of aviation. Akshay Kumar was fantastic in this film that took a good start, only to grow immensely with powerful word of mouth. The film as a clear Superhit commercially.

Fifth film in the list, Rustom, too is based on a real life story. The scandal involving Nanavati had rocked the nation more than four decades back and cinematically too it was grabbed all over again when Akshay Kumar chose to tell the story to a pan-India audience. Rustom came around the Independence Day weekend and played strongly on the patriotism angle as well. Result? Another good Superhit for Akshay.

Diwali release Ae Dil Hai Mushkil could have added another Rs. 25-30 crore to its total had there been no clash with Shivaay. Nonetheless, the film still worked in more ways than one since very importantly, it ended up being a much needed hit for Ranbir Kapoor. Karan Johar showed that he can adapt well along with the times and this was evidenced in the characters played by Anushka Sharma and Aishwarya Rai Bachchan.

Third hit for Akshay Kumar in a single calendar year (a feat that has not been accomplished by any other superstar in a really long time), Housefull 3 was a fun ride that had its own share of supporters and detractors. Nonetheless, it went on to still notch a century and if one looks at the year gone by that has hardly seen many successes, this still looks like a feat good enough to be celebrated.

While each of the aforementioned films featured an established actor, Baaghi had one film old Tiger Shroff leading the show. Producer Sajid Nadiadwala (who also has Housefull 3 to his credit) showed good conviction in his Heropanti team of Tiger Shroff and director Sabbir Khan, and put his money on Baaghi. The film not only took a good start but also earned a good and consistent run for itself across the country.

Surprise biggie of the year, Neerja took the slowest start amongst all the other successes of 2016. However, it ended up multiplying its Rs. 4.7 crore opening day by more than 16 times, hence emerging as one of the most liked films that grew immensely through extremely powerful word of mouth. Sonam Kapoor was the only recognizable face leading the show and she gave a strong answer to her detractors here.

A quintessential multiplex success, Kapoor & Sons had Rishi Kapoor in the title role with Sidharth Malhotra and Fawad Khan playing his grandsons. At the very onset, it seemed like a small film that told an offbeat tale. However, the final outcome was supremely heart-warming as audiences gave the Karan Johar production huge thumbs up. Director Shakun Batra demonstrated very good maturity with his well-made tale.