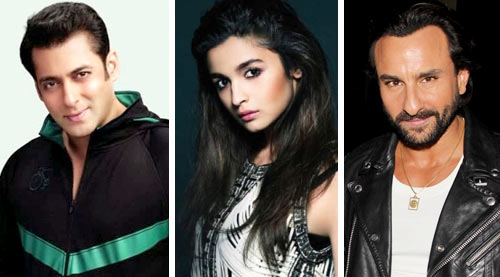 Bollywood is evolving, and how. Gone is the generation when celebrities were confined to their ivory towers and gave an occasional 'darshan' or two to their fans. In the times of superstars interacting with their fans and followers through social networking and preferring to let every inch of their world known to the man on the street, it is also but natural to let their humane side be known to one and all. It is more about 'we belong to one of you' instead of a 'touch me not' attitude.

This also means if an Alia Bhatt sees a flurry of jokes being spread all around her, she joins the revelry as well with a special designed YouTube video. If stars like Salman Khan and Saif Ali Khan are challenged about romancing girls half their age, they joke around their age with glee. If a Rajinikanth is asked about romancing with Aishwarya Rai Bachchan, he narrates how he had to once explain that he is still playing a hero at this age!

In this special feature, here is looking at certain celebrities from year 2014 as well as in the recent past who didn't quite mind a dig on themselves.

Ali Bhatt - Genius of the Year

Finding herself in the middle of 'Alia jokes', the young woman thought that instead of sulking in a corner, it was time to just join the party. The outcome was 'Genius of the Year'. Today, the results are known to one and all. The jokes are still floating around with fervor like never before. Well, everyone is benefitting, isn't it?

Once a 'babuji', always a 'babuji'. This could well be true for Alok Nath who played 'babuji' to Salman Khan in Hum Aapke Hain Kaun when he was barely 38 years old. The tag has stuck and Twitter warmed up to this fact one fine evening. The jokes continued to go viral for weeks at stretch, so much so that Alok Nath started endorsing them as well and even came out with a 'Babuji special' music video!

He is often asked about his age and how he is still active in the genre of romcom when he is on the wrong side of the 40s. His oft repeated response here is that he is still young at heart. Well, he says the same again in Happy Ending, and has a good enough conversation with his alter ego who doesn't mince words while bringing him closer to reality.

When he kisses, he scores at the box office. When a kiss is missing or it is notional or worse, is dispassionate, his films haven't quite worked. Emraan Hashmi realizes that and while it could just be a coincidence, it is also a fact. No wonder, the promo of Ungli concluded with a scene where Emraan - when questioned about his intentions by a girl - quipped that he 'specializes in kissing'. And so said the serial kisser!

Known for meager budgets that he gets to make his films, Anurag Kashyap has been managing to survive for close to a decade now. Not quite minding the struggle in real life, he (while playing himself) expresses his helplessness around budget issues when Amitabh Bachchan has a conversation with him in Bhoothnath Returns.

In a light hearted clip from Happy Ending, Ileana D'Cruz is pegged by Saif Ali Khan to extend her chest out so as to entice motorists into giving her a lift. So far so good, except when she says that she has gone the maximum, Saif is left amused and asks her to strip off everything. Of what is shown in the promo, she doesn't seem to mind the joke. No wonder, she is sexy in her own way!

'He has a lot of fans on Twitter, I don't know how' - and so quipped Saif Ali Khan while referring to Riteish Deshmukh in Humshakals. While this was mentioned as an in-film joke, it could well be a running topic of discussion in the industry circles as well, considering the fan following that Riteish Deshmukh enjoys. As is his true sporting self, the 'lai bhaari villain' didn't mind that at all!

In the 80s and the 90s when single screens ruled, Govinda ruled too. With the advent of multiplexes, audience's taste changed. While Govinda has admitted that he didn't have work for almost half a decade in the recent times, he doesn't mind stating in Happy Ending (where he plays a Bollywood hero) that while he is a single screen star, he needs to reach out to the multiplex audience. Now that's being a sport!

Some of the earlier instances where actors didn't shy away from being a part of the joke on themselves.

In Luck by Chance, Sanjay Kapoor spoofed himself as a hero-turned-filmmaker. Tagged as a one-hit wonder (Raja), he didn't mind cutting a joke on himself repeatedly in the film where he said to his colleagues time and again - ''Hum Bhi Actor Reh Chuke Hain." Hilarious!

Now this is what folklore is made of. During a promotional event for his biggie Robot, he narrated an anecdote on how some people were amazed that Aishwarya Rai Bachchan was working with him. This isn't all as they just couldn't believe when Rajinikanth informed them that he is the 'hero'. For the actor who was approaching 60 then, it was good to see some wry humor on display.

Sharman Joshi featured in Rohit Shetty's Golmaal. However, he couldn't do Golmaal Returns due to date issues, or so was the official reason. There were rumors though that something else had transpired with the makers due to which Sharman has opted out. The speculation saw further ignition when Sharman's photograph was placed in the film as a dead or missing character. The actor didn't mind it though!

Always under scrutiny for her weight, Sonakshi Sinha has been quite a sport in answering any and every query centered on this topic. No wonder, she allowed this to be extended to her film R... Rajkumar as well where Shahid comments on how she is so heavy and yet, he doesn't mind while persistent enough to 'patao' her.