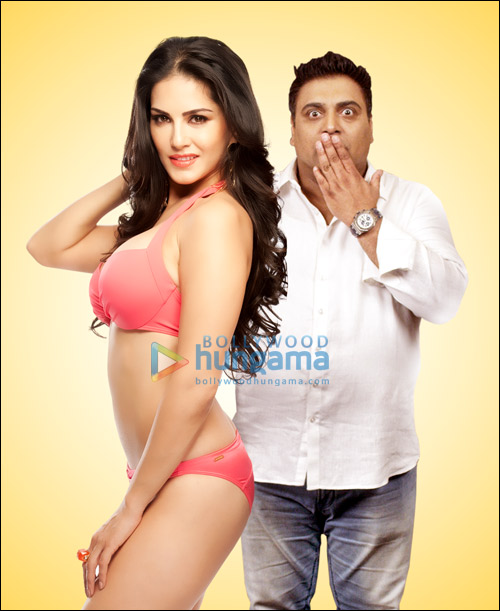 In a rather unique move, Devang Dholakia's upcoming directorial Kuch Kuch Locha Hai will have Sunny Leone paired opposite popular TV actor Ram Kapoor. As unconventional as that may sound, the film is said to be a hilarious fun ride and is currently being shot in Malaysia. Commenting on the film Devang says, "My film is a spicy sexy comedy. The situations and the jokes are bound to have the audiences in splits and it is our belief that no one will have seen Ram Kapoor and Sunny Leone in the avatars that they are going to be seen in the film before. It's too early to reveal the storyline of the film but we all know that the audiences will have as much fun watching it as we are having shooting it."

In fact, we recently got a glimpse of the film where Sunny Leone is in her elements sporting a pink bikini, flaunting her voluptuous figure and on the other hand, we have a rather conservative looking Ram Kapoor, who is left wide eyed with Sunny's antics. The comic caper will have Ram Kapoor, playing the role of a rich Gujarati businessman and Sunny Leone playing a superstar. Also, considering it will be directed by Devang Dholakia, it is also said to have some quirks that are related to Gujaratis.


Further Sunny, for whom the film will be her first out and out comic caper adds, "I am elated to be working with Devang again and am really excited about working with the super funny Ram Kapoor. Devang and I have a very special relationship, not just as friends but he is like my family! The whole team and I always have a great time shooting and I know that with Ram added to our already crazy mix, shooting for this film will be a blast. Ram is a revelation to work with. Not only are we laughing and joking around but Ram also shares valuable tips important for a film like ours and I consider myself lucky to be working with such an experienced actor."


Initially, the film was titled Patel Rap but later it was changed to Kuch Kuch Locha Hai. Devang Dholakia stated that the reason for this was that this title is apt since it doesn't reveal the plot but at the same time represent the film appropriately because there are truly going to be many 'lochas' in the film. Produced by Magic Pictures and Entertainment Pvt Ltd and Maximus Multimedia Pvt Ltd in association with Alumbra Entertainment, Kuch Kuch Locha Hai is a spicy sexy comedy about a typical dysfunctional comedy that also stars Evelyn Sharma.