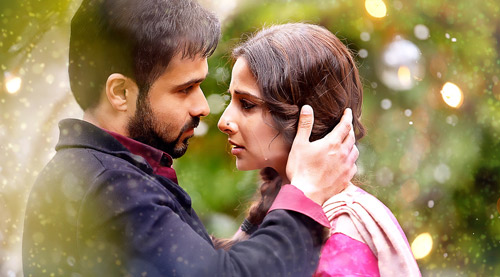 Just like everyone else, we too were expecting a touching romantic tale when we checked into the

theatre to see Emraan Hashmi and Vidya Balan's Hamari Adhuri Kahani. However, what we saw on screen had us in

splits. Though we felt bad for the very talented Emraan and Vidya, who tried their best to hold the film together, we

couldn't help but bring you some of the gems from the film. The following points also have spoilers, so if you plan to

1. The film starts in today's time, then goes 20 years into flashback, which is also...today's time.

2. Emraan Hashmi, the owner of a whopping 108 hotels, doesn't mind setting up fire in his plush hotel and scaring all his

guests, just to test the loyalty quotient of his staff. No, he has never heard of mock fire drill.

3. Emraan, a multi-millionaire hotel owner, will leave aside all his work just to go flower shopping with a married

florist, whom he fancies.

4. Emraan's business partner's only job in the company is to remind him that 'he is getting late for his flight'.

5. When Vidya Balan quits her job in Dubai, she decides to go to the airport walking through a lonely desert. Taking the

hotel car after quitting must have been way below her ethics?

6. Multi-millionaire Emraan's old mother and her ill lover Jeevan are put up far away in some corner of Shimla, where

she plays piano all day to Jeevan, who is by the way in coma for decades. Don't ask why... it's very normal.

offence and instead takes her advice on love and happily sleeps with her son in the very next scene.

8. Emraan Hashmi, despite being a sensible businessman, threatens the Home Minister to save an unknown (alleged

9. Emraan creepily keeps asking Vidya to send him her selfies, especially when she's upset and crying. PS. He falls in

love with Vidya because she reminds him of his mother. Super creepy!

10. Emraan gets so obsessed with 'phoolon ki khushbu' that he gets off a jeep in a Naxalite area as he somehow manages to

hidden in it which the government is fully aware of and has done nothing about and Emraan Hashmi dies. How the gardener

managed to grow flowers over landmines is something that only script writer Mahesh Bhatt can explain. Years later,

Rajkummar goes and sits in the same landmine garden but nothing happens to him.

11. Rajkummar Rao is labelled a bad guy because he was away from his wife for 5 years. No one actually cares that he was

kidnapped and held back by Naxalites during that time period.

12. Even better, he gets shot in his foot and the wound stays fresh for years together! Then one night he prays to god

and a tree falls, conveniently breaking a wall of the room he is put it in and he escapes.

13. Suhasini Mulay makes two almost ghost-like cameo appearances with no explanation of who she is. Her job is to only

14. The super-rich Emraan Hashmi doesn't have a house. Yes you read it right... he is a homeless man.

15. Script writer Mahesh Bhatt and dialogue writer Shagufta Rafique are stuck in a major time warp where all their

characters lack human logic and talk in philosophical poems which actually make no sense at all. Maybe they were smelling

some other green stuff instead of flowers.

Emraan Hashmi takes a dig at the Mumbai…