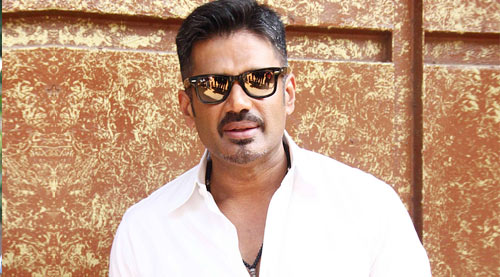 Suniel Shetty has done over 100 films in a career spanning over two decades. On the other hand director Anand Kumar is a relative newbie with only three films behind him. Now that the two are coming together for Desi Kattey, Suniel Shetty is glad that in the pivotal part of a shooting coach, he is adding weight to the film's script. He goes on to add that he has no qualms working with new people in the industry, something that he has propagated right from the beginning of his career till date.

"See, out of 110 odd films that I have done in my career, 60-70 have been with new directors. It's too late for me to change now. Having said that, I honestly reject so many films even today because some of them I don't want to be associated with and the others I know for sure would not see the light of the day. But then if someone comes to me with something as powerful as Desi Kattey, my doors are open for him," assures Suniel who was seen a few months back as an IAS officer in Koyelaanchal, where he was appreciated for his subtle act.

Now in Desi Kattey, he is playing his age in the part of an ex-Major.

"The film is about these two kids (Jay Bhanushali, Akhil Kapur) who are in the business of manufacturing 'desi katta' (local weapon). Then I come into their life and spot their potential of hitting the 'right target', pun intended. I inspire them to represent the country with their talent in the sport of shooting. While one chooses to take the sport route, another stays on to be a part of underworld as he wishes to make quick money," details Suniel.

It was the very concept of underworld-meeting-sports that bowled him over.

"I have never heard of this fusion before. Anand brought to me such an interesting script that I had to do it. It didn't matter to me if he has made only a few movies before. Desi Kattey is indeed going to be a good piece of work for audience to be entertained. Also, the very concept is unique," says Suniel.

One hopes this is indeed the case when the film releases all over on September 26.