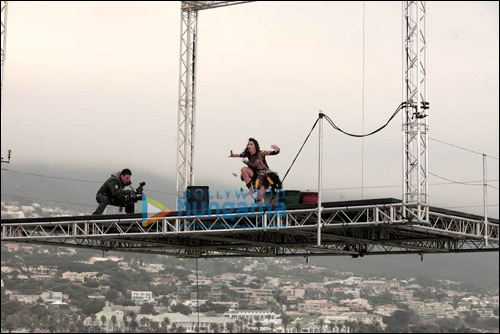 The Ranchi based Alisha Singh, who happens to be one of the 10 contestants on Life OK channel's reality show 'Dare 2 Dance', is one happy girl these days. And the reason for her happiness is none other than Akshay Kumar, who also happens to be the host of the show.

What had happened was that Alisha had to performon a high rise platform in Cape Town for one of the acts of the show, for which she was made to dance on a stage which was placed at a height 40 feet from the ground. Alisha, despite being a trained dancer, was acrophobic and had her fear for heights placed to an extreme that she wasn't able step on the platform. This is when the daredevil Akshay Kumar stepped in and promised her to be by her side on the high rise platform during her performance, which immediately boosted Alisha's morale to an all-time high. But, since Akshay couldn't be by her side due to the camera angles, he decided to pick up the camera himself and shoot her dance performance on the high rise! Needless to say that, not just Alisha, but the whole crew was stunned to the core.

If that wasn't enough then, Akshay even made Alisha jump from the high rise on to the ground which was protected by air filled bag!