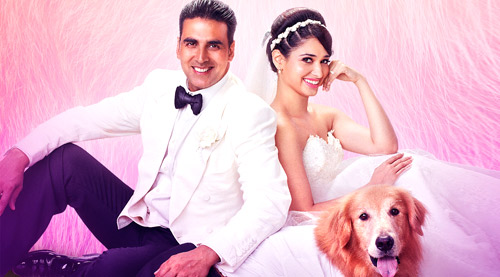 Entertainment released this week and there are some understated gems that Bollywood Hungama would like to share with you!

1.   As per Thailand law, even if a convict tries to escape jail and is subsequently caught, not a day is added to the punishment and he would still be let scot-free as per original plans


2.   Don't underestimate the power of a dog who has been stripped off his Rs. 3000 crore worth wealth. He can still bring on 100 odd 'dog goons' of different shapes, sizes and breed, and kick the sh#$ out of bad guys


3.   An almost dead man can be revived by giving him a shock by two press irons


4.   A top hospital in Mumbai can continue to keep a man admitted on false pretext, despite him being hale-n-hearty. Medical reports be damned!


5.   Continuity experts can ensure that a bandage is well in place for the leading man with a minor bruise on his knuckles. However, hero's best friend won't get such privilege despite being beaten black and blue


6.   A father would be okay with his daughter marrying a rich dog as eventually 'all men turn dogs after marriage'


7.   A mother would return from the dead to sing 'Yeh Bandhan Toh Pyaar Ka Bandhan Hai' in the background every time her sons Karan and Arjun are on the verge of a conflict


8.   Never mind a man who has all the 'negative' qualities in him; he would still be happy since he is HIV 'positive'


9.   A single 'bow' (bark) from a dog could qualify for a dozen odd different connotations, and in the process fooling pea sized brains into believing that he can actually talk


10.   In Thailand courts, a property dispute worth Rs. 3000 crore can be settled overnight. Well, literally!