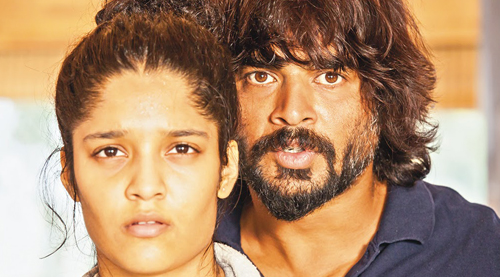 1. Suddenly this year, boxers and wrestlers are out to have a field day in the ring. After Madhavan in Saala Khadoos, it's Randeep Hooda playing a boxer in Do Lafzon

Ki Kahani. Salman Khan in Sultan and Aamir Khan in Dangal play wrestlers. Last year it was Akshay Kumar as a boxer in Brothers.


2. No major stars except Madhavan in Saala Khadoos, the Tamil-Hindi actor who was sidelined for his understated layered performance in Raj Kumar Hirani's historical hit 3 Idiots and

as a wounded spouse in the two Tanu-Manu movies. In Saala Khadoos (SK) Maddy takes center stage for a change. And how!


3. Complete makeover of the artiste: Madhavan took two years off from acting to bulk and beef up for his role as the Adi Tomar, the burnt-out raging wrestler who gets one more unexpected shot at

glory. Not only did Maddy transform himself physically he entered the mind of the embittered boxer to occupy his character's heart and soul. The dedication shows.


4. Real-life lady-champ jumps into the ring: Real-life boxer Ritika Singh is the promising boxer whom Maddy mentors. Ritika unlearnt all her boxing skills in front of the camera to look convincing


5. Getting Raj Kumar Hirani on board as co-producer for the Hindi version was a masterstroke. Potential viewers began to see SK as a 'Hirani type of cinema' In other words, as motivational and

engaging. Hirani has gone all-out to back support and promote the film.


6. The director has been with the project for 6 years. Sudha Kongara Prasad has lived through every moment of the script before putting it on screen. She isn't faking the conflicts. Every character

and every moment in the script is based on actuality.


7. The fights and the conflicts look real and not staged. Since both the protagonists in the film are boxer, the other trained to look like one, the fights go for the kill. Mary Kom, move


8. It's been a while since we had a rugged no-holds-barred film with a sporty background. Lagaan, Chak De and Mary Kom are the only names that come to mind. No sports film

worth talking about since then.


9. Saala Khadoos releases a week after Airlift. Both are motivational inspirational stories with the same theme-faith can move mountains-running through them. Moreover, SK opens

alongside Mastizaade which has its own mountains to climb.


10. SK will release in 2 versions. In Hindi and Tamil. The Tamil version entitled Irudhi Suttru is tonally and even content-wise different from the Hindi version. Two interpretations of the

same plot is an interesting way to reserve audiences' attention across a broad bandwidth.