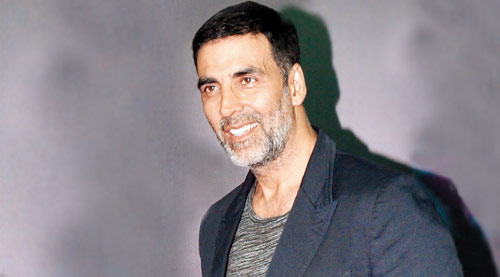 Among the 5 A-lister superstars-Shah Rukh Khan, Aamir Khan, Salman Khan, Hrithik Roshan, Akshay Kumar (and Ajay Devgn if you want it to stretch it to no 6), Akshay Kumar stands tall. Here are 10 reasons why.


1. Fit & fine at 48: At a time when the other superstars are beginning to show their age by fumbling towards flab, Akshay Kumar remains physically fab. He has been naturally fit for years. Never opting fo...ummm....quick remedies to obtain 6 packs. He doesn't want them.


2. Universal appeal: Akshay is liked by every section of the audience across all age groups. His screen presence is like Kishore Kumar's voice. Do you know of anyone who doesn't warm up to it?


3. No bullshit policy in life: Akshay Kumar never tries to make good copy by badmouthing his colleagues, or darting clever innuendos about them. At the risk of being branded boring, he has remained steadfast in his resolution to never talk ill of anyone in any format of expressionâ€¦ print, electronic or personal communication.


4. Not afraid to age: He wears his salt and pepper beard like a veteran soldier's war wound. And he doesn't mind playing Big Bro to a Sidharth Malhotra in Brothers because he knows; he can't be beaten at the beating-up game.


5. Willing to grow: Akshay has never been afraid to shed his inhibition and to appear foolish on screen if the character requires. That's one helluva confident actor we see on screen in Entertainment and Gabbar Is Back.


6. Rock 'n' Roll: Reveals a heightened level of quality consciousness in his selection of roles in recent times. Balanced out a Baby with a Gabbar Is Back during 2015. Akshay knows which scripts work for him and he's seldom wrong.


7. Dilwala Dilliwala: Supports social and athletic causes. Rather than waste his off-work time tweeting wisdom and cutting ribbons, he rushes home to be with his family. Avoids oily food and oily company. Even directors who make oily films. Farah Khan would vouch for that.


8. No Chamchas, please: Above all, Akshay avoids jee-huzoors. Stays away from sycophants and flatterers. He has seen the damage chamchas can do very near home. His father-in-law Rajesh Khanna, the greatest superstar India has ever produced, perished because of the flatterers.


9. Wedded into showbiz: Akshay wasn't born in a film family. But he married into one. Both his father-in-law and mother-in-law Rajesh Khanna and Dimple Kapadia are renowned actors.


10. Run-on relationships: Akshay's friends are forever. Even his faithful Man-Friday Nitin has been with him for 20 years.