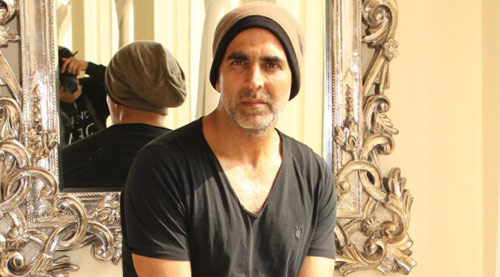 
Akshay who turns 48 on September 9 says he has absolutely no fear of aging. In fact when diehard fans say the salt-and-pepper beard makes him look older he chooses not to care about the growing years.


Says Akshay defiantly, "If I look nearly 50 with my beard that's because I am nearly 50. It's my face and I'll grow my beard how I want to. I don't care if my salt and pepper beard makes me look my age. I'm proud of how I look."


Poking fun at instant formulas for youth the superstar who has had a fabulous year at the box office with Baby, Gabbar Is Back and Brothers asserts, "I'm not running off into secret holidays shoving needles in my face and drinking youth potions. I'm my own self, I have no vices. I don't smoke or drink. I take care of myself. I've never tried to be someone I'm not."


When I point out that he hardly looks his age Akshay shoots back, "How many 50-year olds do you know that can do what I do at my age?"


The star's recipe for a healthy life? "We should embrace our natural growth, not hide from it, why would I show you a fake version of me? If you're a real fan you'll want to see me, not a product version of me squeezed out from a bottle."


As one of the fittest actors in this country what's Akshay's message to his fans? "Health and fitness is the key to fulfilling any physical dream, even if it's just to look good for your partner, or for yourself, but get up and go out there and exercise your body, no excuses."