Chelsea Football Club is delighted to announce the signing of Bollywood actor Arjun Kapoor, as its brand ambassador for India. In a first of its kind association by any Premier League Football Club, the multi-talented actor who is an ardent Chelsea FC will lead the club’s Indian fan engagement initiative which will include Arjun being featured in a series of digital talk shows featuring Chelsea FC fans in India, across Chelsea FC’s social networks and communicating with fans online and in person. 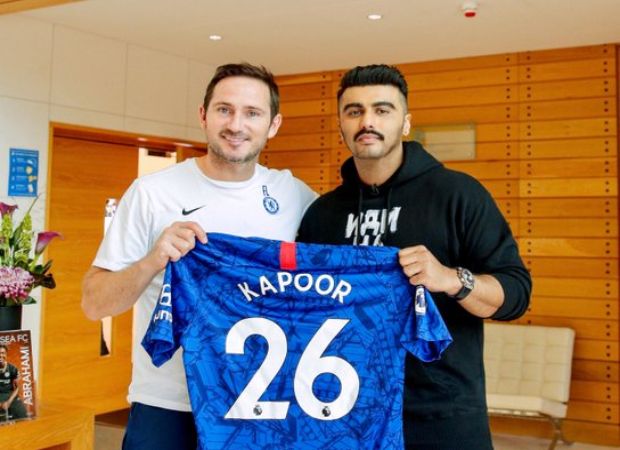 The announcement was made in Chelsea FC’s training ground in Cobham, the UK, in the esteemed presence of their legendary ex-player and current manager, Frank Lampard. Speaking about the association, Frank Lampard said, “We are delighted to welcome Arjun Kapoor into the Chelsea FC family. He is a versatile actor with a fantastic personality and a deep love for the club. Arjun's charisma and passion will be brought onto screens as he hosts our brand-new digital fan-show "Out of the Blue with Arjun Kapoor".

As a brand ambassador for the club in India, Arjun Kapoor will be featured in a series of digital talk shows where he will interact with Chelsea FC fans and the current Chelsea FC squad members, bringing the Indian Chelsea FC community closer to the players and the club. "I have passionately rooted for the club, celebrated the victories and felt the heartbreaks from the losses. Chelsea FC is in a rebuilding phase and as a fan, I’m privileged that I’m getting to spread the word in India through my knowledge of the club and the game. I feel like a child inside and can’t stop smiling. It's like a dream come true to be the brand ambassador of Chelsea in India. I’m thrilled that I will be hosting the club’s exclusively crafted campaign Out Of the Blue intended at bringing the Indian fans closer to the club.” said Arjun Kapoor during the launch announcement in London.

“India is a very important market for Chelsea FC and the club are currently engaging with the fans by creating regional content, fan stories and features giving a platform to the fans to share their stories and the ‘Out of the blue with Arjun Kapoor’ show will help us engage with fans in India.”, said Guy Laurence, CEO, Chelsea Football Club. Out of the blue with Arjun Kapoor will roll out from November 2019 and will be available to watch on Chelsea FC’s Facebook and the club’s website and official mobile application - 5th Stand.