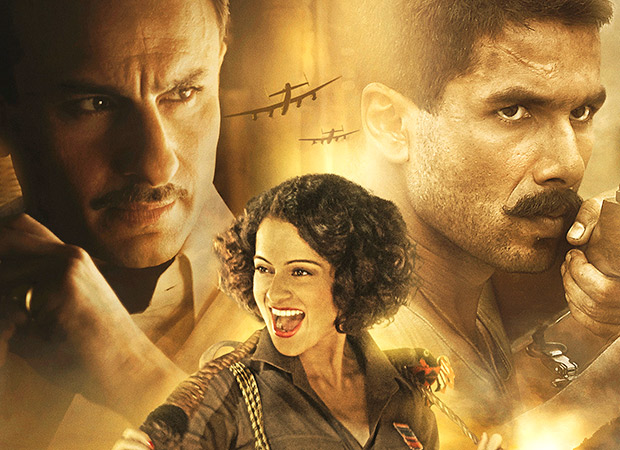 With only a week left from the worldwide release, Vishal Bhardwaj's upcoming film Rangoon starring Shahid Kapoor, Kangana Ranaut and Saif Ali Khan is caught up in a legal trouble. The film production company Wadia Movietone Pvt. Ltd. has filed a legal suit against makers of Rangoon including Vishal on the grounds of copyright infringement in Mumbai High Court.

According to a news report in a leading daily, Roy Wadia, who is JBH Wadia's grandson and Managing Director of the firm, has stated that Kangna Ranaut's character Julia has been inspired from Australian actress Mary Evans who is known as Fearless Nadia. As Kangna plays this feisty stunt woman, Roy Wadia claimed that his firm holds the sole rights to the scripts, posters and publicity material of Fearless Nadia films which has been produced by his firm.

The commercial suit also claims that the makers have infringed on the Fearless Nadia's copyrighted character for Kangna's Julia that also includes her catchphrase, costume and poses. According to Wadia, Nadia was known to use the catchphrase 'Bloody Hell'. Interestingly, the first song from Rangoon was titled 'Bloody Hell' featuring Kangna where she is seen entertaining the army officers of British-occupied India. In this legal suit, Wadia alleges that the makers are using Fearless Nadia's franchise to capitalize on its popularity.

The real reason why Roy Wadia is annoyed is because he alleges that the makers have carried out a breach of trust. Talking about the time in 2006, Roy had approached Ronnie Screwvala of UTV to make a film on Fearless Nadia. They had a meeting but things did not work out between them. Soon after that, the news had emerged that Vishal Bhardwaj was making a period drama on same lines for UTV. But, Wadia was assured by UTV and Vishal that their film was not inspired by Fearless Nadia films. Back then, the film was titled Julia and it was reported that the film was shelved. In the year 2008, Roy Wadia had signed an agreement with a German firm that it could use all copyrighted material on Fearless Nadia to make a film on her.

Seven years down the line, Wadia who thought the Bhardwaj film was shelved, got the news that a film named Rangoon was being made that had a central character named Julia who happens to be a feisty stuntwoman just like Nadia. Wadia had informed the makers that his firm had given rights to a German firm to make movies on Fearless Nadia and if Vishal and team went ahead with Rangoon they could end up in a legal soup. Back then, Disney UTV was headed by Siddharth Roy Kapur who had assured Wadia and the German firm that the film wouldn't be made.

It all now comes to legal controversy. The commercial suit hearing will held at Mumbai High Court on February 20.