Mission: Impossible 7 marks the continuation of a decades-long partnership between franchise superstar Tom Cruise and Paramount Pictures, with the two having worked together on all the Mission: Impossible films. However, all is not well between the two. 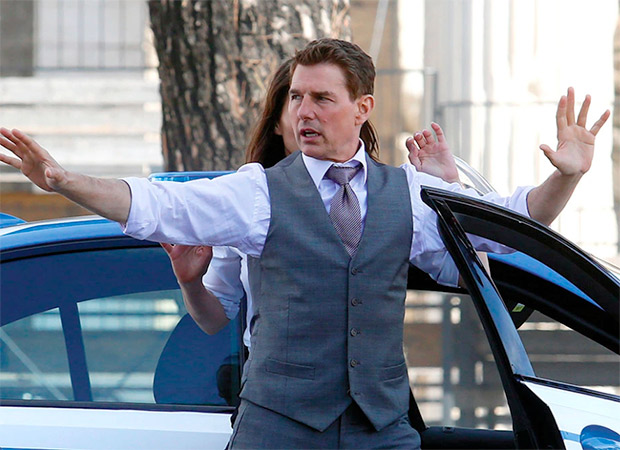 Tom Cruise is reportedly in the midst of a battle with Paramount regarding the theatrical window for Mission: Impossible 7. As per The Hollywood Reporter, multiple industry insiders alleged that the seventh installment is now at the center of a distribution battle between the lead star and producer Cruise and production company Paramount Pictures.

The decision to release M: I 7 on the fledgling Paramount+ streaming app 45 days after the film’s theatrical release is said to have caused tensions between Cruise and the studio, with the star reportedly having lawyered up to come to an agreement with Paramount, but they’re waiting until M: I 7 is finished to resume negotiations.

Per sources, Cruise is set on a more traditional (but certainly outmoded in 2022) three-month window. “For [Cruise], 45 days is like going day-and-date,” a Paramount source told the outlet. “He also felt that setting a date when the movie could be seen on the service would discourage people from going to the theater.”

In January, it was announced that the release of M: I 7 will be pushed from September 2022 to July 14, 2023. Per the report, Cruise is now elongating the production process as a negotiation tactic while simultaneously also working on the eighth (and presumably last) film, Mission: Impossible 8, which is also pushed from previously set July 2023 to June 28, 2024.

The Mission Impossible franchise has proven to be a goldmine for Paramount, with 2018’s Mission: Impossible: Fallout being the highest-grossing film of the series. “You would make [‘Mission: Impossible’] 7 and 8 even if you had a full slate,” a studio veteran told THR. “They weren’t crazy expensive by the standards of Marvel, of Bond.”

To date, the still-unfinished M: I 7 has reportedly hit a massive budget of $290 million with tax incentives. Sources noted that Cruise has allegedly “persuaded” Paramount Pictures’ new president and CEO Brian Robbins to fund Mission: Impossible with more money to finish the seventh film and make the eighth. The untitled eighth Mission: Impossible film has already begun filming. The seventh film began production in Italy, which was one of the first countries in the world to be hit by the initial wave of Covid-19.

Allegedly, former Paramount CEO Jim Gianopulos was ousted in part due to not convincing Cruise to shorten the M:I 7 theatrical release window ahead of a Paramount+ release. “Jim was bridging between what [Paramount’s] Shari [Redstone] and [president and CEO] Bob [Bakish] wanted and what Jim felt was the right thing to do,” which was to protect the relationship with Cruise, one source said. “Part of the reason [Jim] is gone is that Shari and Bob thought they could wave a magic wand,” and persuade the star to accept the shortened window. “Tom is so committed to theatrical.”

Similarly, sources indicate that Cruise will not see eye to eye with new Paramount CEO Gibbons. “Tom says what he wants and the studio says what it wants,” an insider said. “And then Tom gets what he asked for.”

Mission: Impossible 7 features return of Ving Rhames, Simon Pegg, and Rebecca Ferguson, while Hayley Atwell, Pom Klementieff, Shea Whigham, and Cary Elwes will be playing new characters with Esai Morales set to appear as the film’s primary antagonist. The high-profile 7th installment is scheduled for a release on July 14, 2023 while the 8th is slated for June 28, 2024.

Also Read: Tom Cruise’s Top Gun: Maverick to premiere at Cannes Film Festival 2022 ahead of its May release