From its title to its shoots, everything around the Sanjay Dutt biopic remains to be a mystery. Courtesy, Rajkumar Hirani! The filmmaker likes to hold all of it strictly under wraps and has been successful by far. And now, reports have started surfacing that a teaser of this Ranbir Kapoor starrer is on the cards and it will release in April. 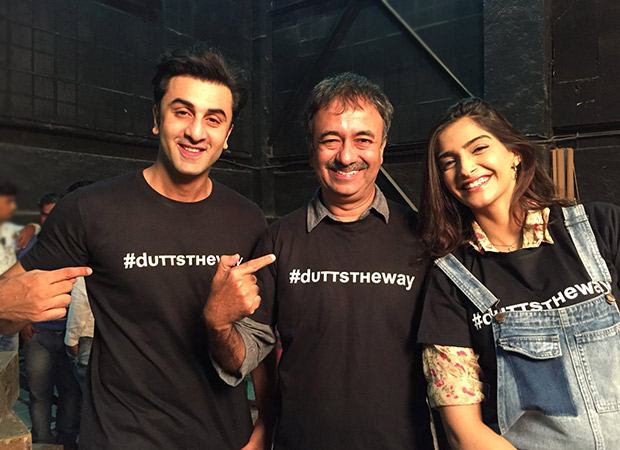 If these reports are to be believed, Rajkumar Hirani is planning on giving a sneak-peek into the Sanjay Dutt biopic on April 24. Although a proper trailer of the film is expected to release in May, it seems that the filmmaker is ready to share glimpses of his ambitious project. The film has been brief account on the journey of Bollywood’s so called ‘bad boy’ Sanjay Dutt. His life has left many intrigued owing to the number of controversies that has haunted him for many years.

On the other hand, Rajkumar Hirani and Sanjay Dutt share a great bond and have went on to make the much popular Munnabhai series. However, Hirani who has worked with Ranbir only in PK where the actor did a cameo has worked with the Kapoor boy for the first time in a full-fledged film this time.

Sanjay Dutt biopic is also expected to star Sonam Kapoor, Dia Mirza, Manisha Koirala, Paresh Rawal, and Vicky Kaushal in prominent roles. Rajkumar Hirani had earlier taken to social media to unveil the release date of the film to be June 29. However, there have been no updates on the progress of the film by far. Also, while there have been many speculations about its title too, an official announcement on the same too is yet to be made.

This is Ranbir Kapoor’s next film after Jagga Jasoos which featured him alongside former girlfriend Katrina Kaif. It will also see him share screen space with his debut film Saawariya co-star Sonam Kapoor after a decade.