While Karan Johar is one of the most powerful filmmakers in the country, he also has been accused of being a ‘flagbearer of nepotism’ and favouring on stars and their kids. More than his films, the chat show that he hosts: Koffee With Karan has been making noise in the media. The season just wrapped up and in its finale, there were was jury of sorts who decided which ones were the best episodes. Vir Das came on the show and took a funny jibe at the pink Koffee With Karan sets and related it to Taapsee Pannu’s movie by the same name. He said, “There’s so much pink in this set that Taapsee Pannu tried to act in it.” Taapsee was very quick to retort to this and tweeted, “Hahahahha nice one. Just that Taapsee still doesn’t qualify to be there. I am looking forward to seeing this episode. All you guys are hilarious (sic).” Do not miss her sly dig at the way Koffee With Karan functions. You either have to be a quintessential A-lister, or act in one of the Dharma movies or maybe be a kid of famous parents to get invited to the show. 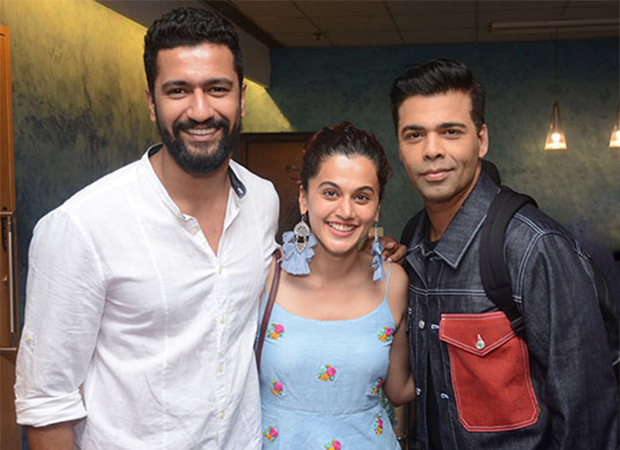 Currently, Taapsee Pannu is on a high after getting critical acclaim for the films like Pink, Manmarziyaan and now Badla. She has proved her gravitas as an actor through all these performances. She is all set to recreate her on screen magic with Amitabh Bachchan with Sujoy Ghosh’s Badla and the trailer is enough to get us all excited for the film.

Her next project is Saand Ki Aankh with Bhumi Pednekar.

Also Read: Taapsee Pannu CALLS OUT the unprofessionalism of Pati Patni Aur Woh makers for replacing her without informing