A few weeks ago, Taapsee Pannu became the talk of the town after Kangana Ranaut's sister Rangoli Chandel called her 'sasti' copy of Kangana. Filmmaker Anurag Kashyap got into a war of words with Rangoli while defending Taapsee after the derogatory remark. While Taapsee chose to stay silent, she has spoken about the sisters and has stated that she does not want to indulge with them. 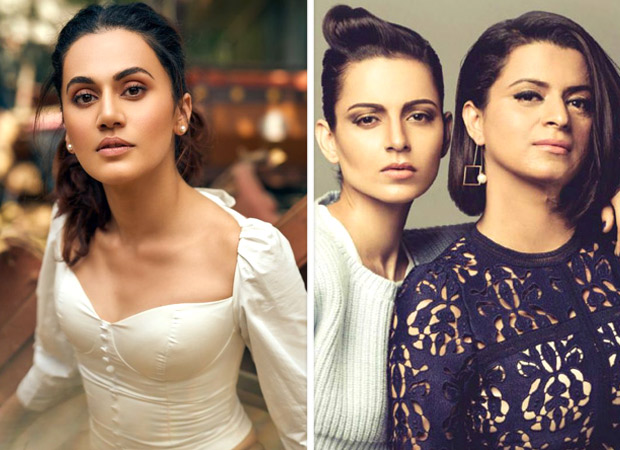 Rangoli Chandel had lashed out at Taapsee Pannu after she failed to mention Kangana Ranaut's name while praising the trailer of JudgeMentall Hai Kya. Rangoli had tweeted, "...they never acknowledge her (Kangana) not even a mention of her name in praising the trailer, last I heard Taapsee ji said Kangana needs a double filter and Tapsee ji you need to stop being a sasti copy."

Speaking on the issue and that Anurag Kashyap had responded to Rangoli, Taapsee Pannu said that it wasn't just Anurag but many of her friends from the industry wanted to respond to Rangoli. But, she stopped them because she did not want to give any mileage on her behalf. She said that Kangana can’t play the nepotism card with her since she worked and struggled to reach where she is today. She even said that she did not want to engage with the sisters because she would not be able to match up to their language.

Taapsee Pannu further dissed Kangana by stating that she wasn't aware that there was a copyright on curly hair which she was born with and honest opinions. She said that she would not apologize for it. Taapsee further reacted to being called “sasti” copy by saying that since Kangana has claimed that she is the highest paid actress, so she is the sasti version.

Taapsee Pannu, on the work front, is looking forward to the release of Mission Mangal which is set to release on Independence Day.