It seems that the week didn’t end on a good note for the hardworking team of Sye Raa Narasimha Reddy. The Chiranjeevi starrer which is expected to be a magnum opus suffered a calamity on the sets when a fire broke out, damaging property worth Rs. 2 crores. The team had erected sets representing a different era since the film is a period drama. But the entire set has been burnt into ashes. However, reports have it that there have been no casualties. 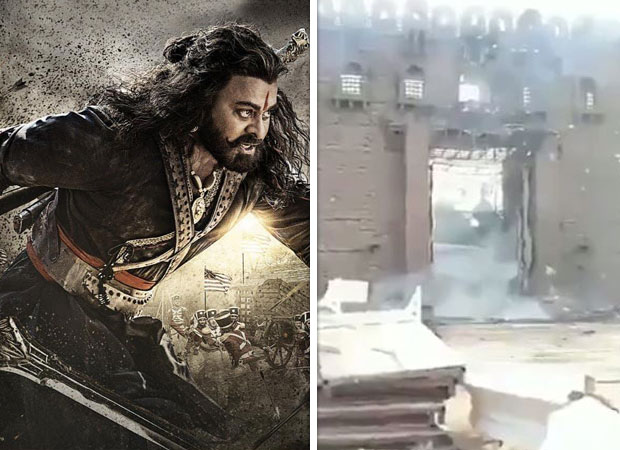 The incident happened when the team was shooting in Kokapet in Hyderabad. In fact, a video of the fire mishap has surfaced online with fans making it viral on social media. If reports are to be believed, the incident is believed to be a consequence of short circuit but not many details on the same have been revealed. The official Instagram handle of the production house, Konidela Production Company of Chiranjeevi’s son Ram Charan, who is producing the film, has posted a statement regarding the fire incident.

Confirming the fire accident, the statement reads, “Unfortunately a fire broke out on our #SyeRaa set in Kokapet earlier this morning. Thankfully everyone in the team is safe and no one is hurt. We are looking forward for our last schedule to finish. – Ram Charan.” We hear, considering the expensive sets, the team will take some time to rebuild the same.

Here’s a glimpse of the fire accident video that has been doing the rounds on the internet.

Fire accident in #Syeraa Set in Kokapet. Most of the Set got damaged ! Shooting part is already completed .. #SyeraaNarasimhaReddy #MegaStarChiranjeevi #RamCharan

Sye Raa Narasimha Reddy is expected to feature an ensemble cast of Nayanthara, Kiccha Sudeep, Jagapati Babu amongst others with Amitabh Bachchan to playing a pivotal cameo in the film.