Actress Sanya Malhotra who has created a niche for herself with her promising performances and impressionable character portrayals in just a bunch of movies has another surprise for us! Staying true to her habit of choosing varied roles, Sanya is set to star in another edgy film, Pagglait. 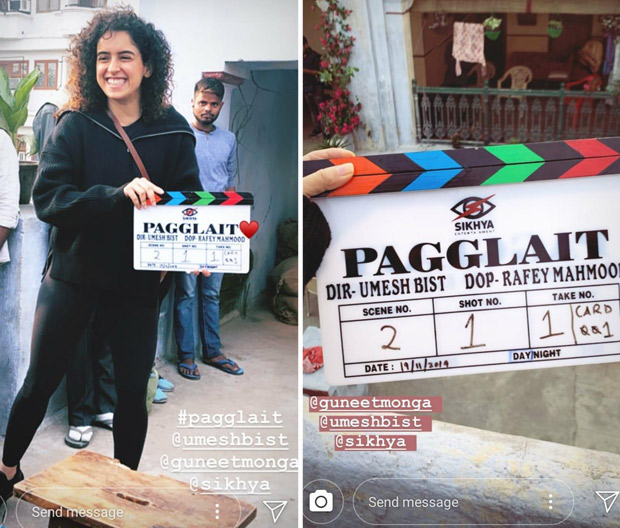 Today, the actress shared pictures of the first-day shoot on her Instagram story. The actress is seen holding a film clap in the picture. Makers have kept the details under wrap and not much is known about the film's story and other casts of the film. In another picture shared, Sanya has given us a glimpse of the puja-muhurat calling it, ‘film arambh’.

Apart from this, Sanya will be seen next in Shakuntala Devi where she is working alongside Vidya Balan. She will be playing the role of Shakuntala Devi's daughter Anupama Banerjee in this one and another project, Anurag Basu's untitled next opposite Aditya Roy Kapur. Both films are slated to release early next year.

Sanya Malhotra made a power-packed debut with Dangal, where she played the role of a wrestler. Later, she went on to star in 2018's surprise hit Badhaai Ho and critically acclaimed Pataakha and later, Photograph where she proved her mettle once again- with each of her projects. Her performance in both these films proved that she is a star to watch out and well, even the coveted Berlinale hailed Sanya as one of their top five breakout stars of the year from across the world.

Looking at Sanya's choice of films till now, one can be sure that Pagglait will also be a unique film which will bring to us, yet another stellar performance from the actress.

As for the film, Pagglait is being directed by Umesh Bist and produced by Guneet Monga under her banner Sikhya Entertainment. The film will hit the screens in the year 2020.

Also Read: “I did a lot of reading for this one,” says Sanya Malhotra on her upcoming film Shakuntala Devi