The prestigious National Film Awards, for the first time, witnessed an outrage amongst the winners after approximately 50% of them skipped the ceremony in Delhi. Just a day ago, we had spoken about the winners being irked by the busy schedule of the President of India. The said function, that was held a day ago, saw the absence of 65 recipients of the awards. 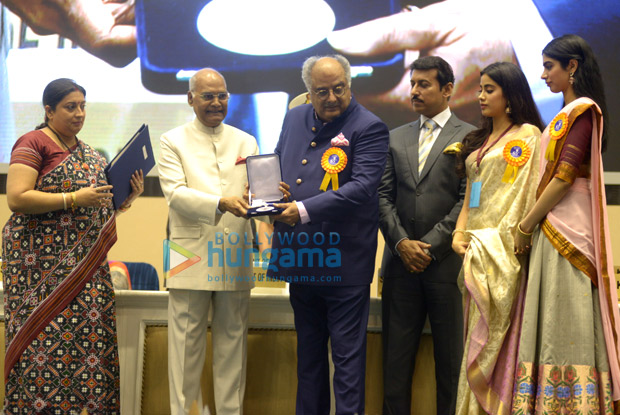 It was earlier mentioned that the President of India, Ram Nath Kovind will be presenting the awards only to 11 winners. Not surprisingly, this created a furor amongst other winners who found this unacceptable. Members of I&B [Information and Broadcasting] Ministry were asked to present awards along with other Ministers from the Information and Broadcasting during the absence of the President.

Addressing their grievances, 66 winners of the National Film Awards wrote a letter to the Directorate of the Film Festival and the President’s office. Malayalam actress Parvathy confirmed that when they didn’t receive any response from the same, 65 of them out of the 140 winners decided to boycott the event.

On the other hand, the event went on smoothly with the families of late Vinod Khanna and late Sridevi receiving the awards of the respective awards from the President of India. As maintained by them, awards until 5:30 were presented by Smriti Irani and other members of I&B Ministry. At 5:30 pm, they were joined by the President in the capital to present the awards.

Bengali actor Riddhi Sen, who was presented with the National Award for Best Actor, voiced out that he doesn’t support this boycott. Interestingly, he was one amongst the 11 award recipients who was felicitated by the President. On the other hand, reports have it that Rashtrapati Bhavan had issued a statement about the schedule of President wherein they had clarified that the President of India attends any event only for a maximum of one hour.