It seems like the controversy between Kangana Ranaut and Alia Bhatt won't end anytime soon. The Manikarnika actress had called Alia's Gully Boy performance ‘mediocre’. After that, Kangana’s sister Rangoli Chandel, on Twitter, blasted Alia and Soni Razdan while hinting at their British citizenship and called them ‘non-Indians’. She even said that Mahesh Bhatt had thrown his shoe at Kangana during her early days in the industry. 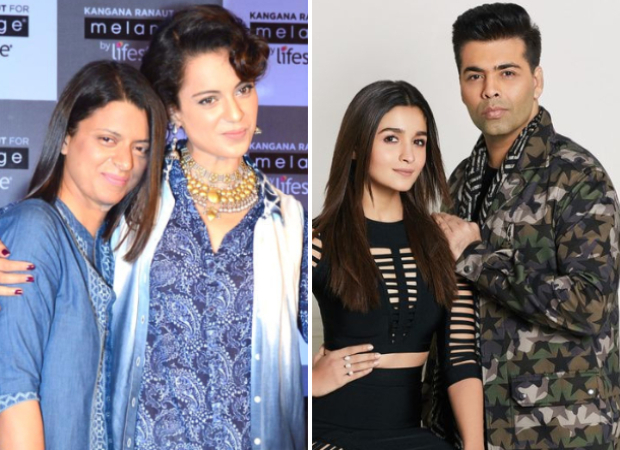 While Alia has chosen to silent on the whole controversy, recently at the Dadasaheb Phalke Awards, the actress said that she would choose to stay silent. She said, “Agar mai aisi hu, then my family is 10 times more mature and stronger than I am. Mujhe isme padna hi nahi hai. I just want to be happy, positive, work hard, be a better version of myself every day. Log kya kahe, log kya na kahe, I should not pay attention to it. And everybody has a right to say what they want to say. Mai bas chup rahugi, that’s my thing.”

Rangoli Chandel, Kangana's sister, has once blasted Alia Bhatt and said that she is trying to milk PR along with her mentor Karan Johar whom she called 'papa kjo'. In a series of tweets, she said that Alia is being very melodramatic and pleads filmmakers to cast her.

I really hope you go quiet darling, you and papa Jo have milked enough backhand PR from this, please take a seat now.... ???? https://t.co/rNwBMEvYMx

People arnt stupid, they see who stands alone and where is gang of movie mafia, in this time and age honesty and transparency is most valued so keep your medieval age ‘ Main chup rahoongi’ sob story to yourself, no need to make this viral everyday... ????????

Snatching others work and opportunities everyday, begging and pleading makers to cast, playing games and using connections to grab films doing back hand PR and on surface behaving like a sheep , as if people are idiots not to see through this...

While whole world propagating speak up or me too Alia ji is going ‘ main chup rahoongi aur zulm sahoongi ???? How regressive is that, coming from a British girl sounds strange ????, if you take a leaf from Papa Jo’s book obviously it will be melodramatic ????

Alia Bhatt is yet to respond to Rangoli Chandel's recent allegations.

On the work front, Alia Bhatt was recently seen in Kalank. The actress will be seen in Brahmastra starring Ranbir Kapoor and Amitabh Bachchan. It is set for Christmas 2019 release.