Kajal Aggarwal has been enjoying motherhood. She has been quite active on Instagram, giving glimpses of her day-to-day life to her fans. From posting baby photos of her son Neil to her workout sessions, the actress has always maintained a rapport with the public and recently a gesture of hers left many impressed. Amidst the starry world, where celebs often consider taking photographs of their babies as an invasion of privacy, Kajal uninhibitedly revealed the face of her son to the camera when she was snapped at the airport with husband Gautam Kitchlu. The Indian 2 actress has been shuttling between cities owing to her work and personal commitments. 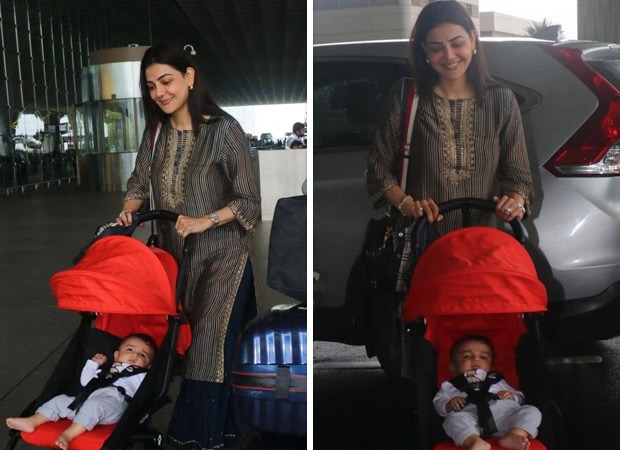 Not too long ago, we reported that Vikram actor Kamal Haasan has returned to the sets of his next anticipated project, Indian 2. The film also features Kajal Aggarwal alongside South-Bollywood star Rakul Preet Singh. While we are unsure of when the actress will be joining the shoot, the actress has been juggling her other professional and personal life after the arrival of her son Neil. Recently when she was taking off on a trip with her husband Gautam Kitchlu and son Neil at the Mumbai airport, paparazzi managed to capture the actress. Not only did she pose for them but she also made no attempts to cover the face of her son, unlike many other celebs. This gesture left many impressed who called them as a ‘normal couple’ who are extremely dissimilar to other starry couples. One of them even went on to compare them with Virat Kohli and Anushka Sharma, who has never allowed paparazzi to click a photo of their daughter Vamika.

Speaking of Kajal Aggarwal, besides Indian 2, the actress also has the female-centric Karungaapiyam with Regina Cassandra, Janani Iyer, and Raiza Wilson, and Ghosty with Yogi Babu, among others.