Each day a lot of things happen in the world of Bollywood. From new film announcements to celebrities being spotted with their rumoured partners, to of course social engagements, Bollywood News and celebrations. Rounding up the rather active day in a comprehensive way, Bollywood Hungama brings to you a specialized way to catch up. So, from Hrithik Roshan’s rumoured girlfriend Saba Azad spending time with his kids to Samantha Ruth Prabhu’s new look, here are today’s top trending entertainment and Bollywood news. 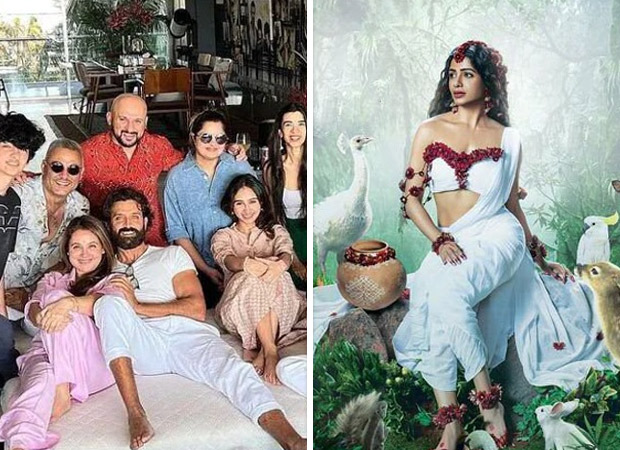 Earlier today the streaming giant Netflix announced its revenge thriller film Thar. Inspired by Western Noir genres, Thar is set in the eighties and essays the story of Siddharth - played by Harsh Varrdhan Kapoor. Shifting to Pushkar for a job, Siddharth embarks on a journey to avenge his past. Will he succeed or does Pushkar have something else to offer him? The revenge noir thriller boasts of versatile actors like Anil Kapoor, Harsh Varrdhan Kapoor, Fatima Sana Shaikh, and Satish Kaushik and marks the directorial debut of Raj Singh Chaudhary who has also written the film. Read the full story HERE.

Over the years we have seen a number of celebrities join Salman Khan’s Da-Bangg Tour. Now we hear that the latest names to join the actor’s upcoming concert in Dubai are none other than his Bharat co-star Disha Patani and Salman’s co-star from his upcoming film Bhaijaan (earlier titled Kabhi Eid Kabhi Diwali), Pooja Hegde. Read on for more DETAILS.

A while back Hrithik Roshan made headlines when he was snapped exiting a popular suburban eatery hand in hand with Saba Azad. While the images set the rumour mills running in top gear, the actor and his new lady interest have been unfazed. In fact, over the weekend, Saba spent some quality time with Hrithik and his family including his kids- Hrehaan and Hridhaan- and his parents Rakesh and Pinky Roshan. Click here to see IMAGES

Kareena Kapoor Khan and Saif Ali Khan's second child Jeh Ali Khan turns a year old today. To wish her son on social media, Kareena took to her Instagram feed and shared an adorable picture of Jeh and her elder brother Taimur Ali Khan. In the picture, Jeh can be seen crawling behind his brother Taimur who is also seen crawling on the floor of their house. Click to see IMAGES.

Samantha Ruth Prabhu has some interesting projects in the pipeline with Shaakuntalam being one of them. She will be essaying the mythological character Shakuntala in the film. On Monday morning, the actress dropped her first look from the film and she looks absolutely dreamy. In the first look of Samantha as Shakuntala, she is seen dressed in a white blouse and dhoti with a dupatta. She is seen posing in a forest surrounded by animals and birds who are looking towards her, visibly taken in by her beauty. Read more HERE.

Actor Vijay was spotted on his way to poll both in Chennai to cast vote as the part of Tamil Nadu local body elections on Saturday. The actor made his way to a public school turned election booth located in Neelankarai, Chennai. Vijay focused on casting his vote for the elections whereas the situation tuned unexpected as a huge number of fans & media gathered at the venue for a glimpse of the actor. A viral video showed actor Vijay surrounded by fans and cameramen which made it difficult for others to cast their vote. While noticing the problem caused, Vijay apologized to the authorities with folded hands and after looking at the video, fans praised his kind gesture. Click to read MORE.