The leading lady of Bollywood Deepika Padukone wrapped the first schedule of Chhapaak in Delhi. Deepika Padukone began the shoot for Chhapaak in the capital on 25th March, 2019 and wrapped the first schedule today.  After finishing the shoot, the actress headed back to Mumbai. Deepika kept her look simple yet classy as she donned a basic black tee paired with relaxed denim jeans and black heels. The actress' first look as Laxmi came out as an utter surprise to her fans and fellow Bollywood mates who couldn't believe their eyes upon seeing her massive transformation. 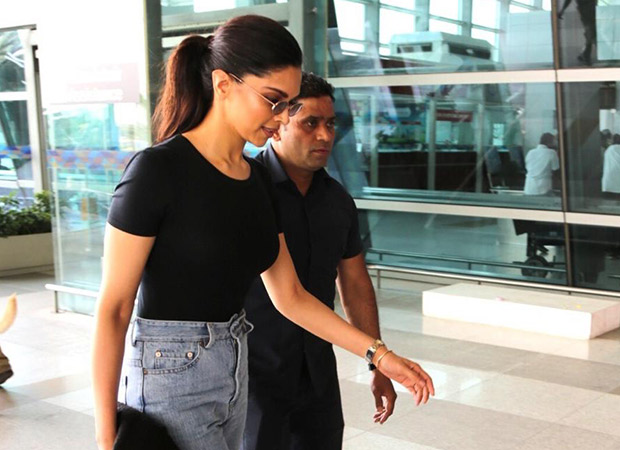 And soon, the actress received a lot of love and appreciation for her look, from the audience as well as whole Bollywood. Now with Chhapaak, which is about determination and the undying human spirit of not giving up despite adversities at every step Deepika is playing yet another challenging role. The Queen of box office and the numero uno actress in Bollywood is not just loved and admired in India but also has her global imprints. Owing to the unfathomable fan base of the actress around the world, the Statue of Purpose features Deepika in the elegant and graceful Cannes look.

After the tremendous success of her last outing Padmaavat, Deepika Padukone became the first actress to deliver a 300 crore film with a female solo lead. Achieving one feat after another, Deepika Padukone is the indisputable queen of box office with numerous films of 100 crore club as well as 200 crore club. The most beautiful woman, Deepika Padukone has wrapped up the first schedule for her first production venture which will have her essaying the role of an acid attack victim. The actress believes the story needs to be told and has bankrolled her maiden production to put forth a strong, brave, courageous and independent female character.

Also Read: Here’s why your favorite Bollywood Stars CANNOT cast a vote in the Lok Sabha elections of 2019