Well, he may have found love in Bollywood actress Sagarika Ghatge and now the cricketer Zaheer Khan wants to enter the world of cinema itself, it seems! Zaheer Khan was recently snapped with Suniel Shetty that has given rise to many speculations. From the cricketer planning to make his Bollywood debut to the two having some intense discussions over the sports scene, there have many reports about their alleged collaboration. 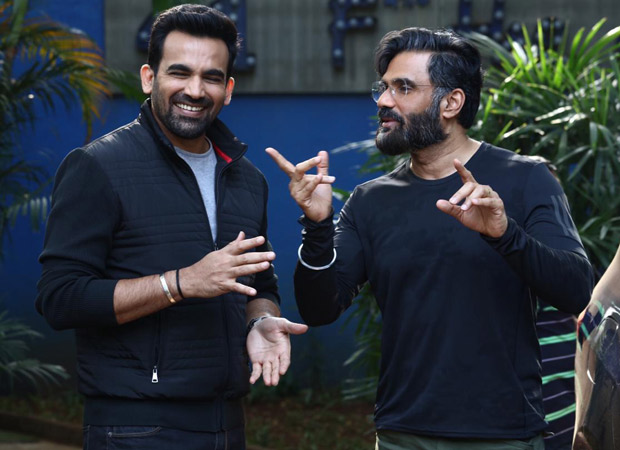 Recently Zaheer Khan and Suniel Shetty met a day ago and were seen having a fun chit chat session. Reports, since then, have been speculating about the varied reasons of the two of them meeting. One being that Zaheer and Suniel are planning to join hands for a film! It is being said that Shetty came across an intriguing script that caught his attention and it was based on sports. Keeping in mind Zaheer’s cricket background, he thought it would be apt to approach his friend for the film. It has also been asserted in certain reports that Zaheer has liked the script and is keen on taking ahead.

Another set of reports state a completely different story. It states that the actor and the cricketer are contemplating on starting up a new cricket league. The two planned to have a series of meetings to discuss the same and it was one of those meetings that was held a day ago. However, neither Zaheer nor Suniel Shetty have given out any details on the meeting. While the photo shoot of Zaheer and Suniel continue to raise questions, let us assure that definitely a collaboration is on the cards. Whether it is a film or a cricket league, only time will tell!

If these reports are to be believed, the final announcement about their recent meeting will be made in mid-December.