Well, it seems that Aishwarya Rai Bachchan was in for a series of surprises, courtesy Abhishek Bachchan. The power couple decided to ring in the Devdas actress’ birthday in a private yet romantic manner. We hear that Abhishek Bachchan took off to Goa and whisked away his wife Aishwarya and their daughter Aaradhya for a small vacation. The actress also enjoyed a surprise bash on the birthday even along with friends and family. 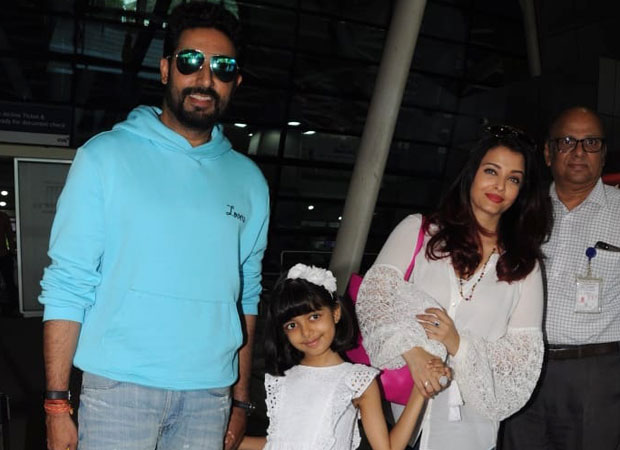 It is being said that last night, Abhishek Bachchan had planned a special birthday bash for Aishwarya Rai Bachchan. Not surprisingly, it was a private and intimate event like the way the actress likes it and it was hosted at their residence in Juhu itself. After this, the couple is said to have visited the iconic Siddhivinayak Temple in South Mumbai before taking off to Goa early morning.

Abhishek Bachchan is said to have taken off from his film schedule for this short family getaway. If reports are to be believed, the actor is said to have started shooting for the Anurag Basu film, which is expected to be made on the lines of Life In A Metro. Abhishek is said to have taken a break from the same and will resume the shoot on November 4 after he returns from his Goa holiday with his family.

On the other hand, we also hear that Aishwarya Rai Bachchan will continue her ritual of contributing to the Cancer Patients Aid Association this year too on the occasion of her birthday. While she generally takes time off to visit the children there on her birthday, the executive director of CPAA, Anita Peter has confirmed in reports that even though it has been a ritual that the actress follows for long, this time around, they have been told that she is travelling and won’t be able to make it on the day of her birthday. However, Anita also added that she has promised to visit the children once she returns from the trip.

Also Read: Aishwarya Rai Bachchan SUPPORTS Me Too revolution, refers to her stand on abusive relationship with Salman Khan