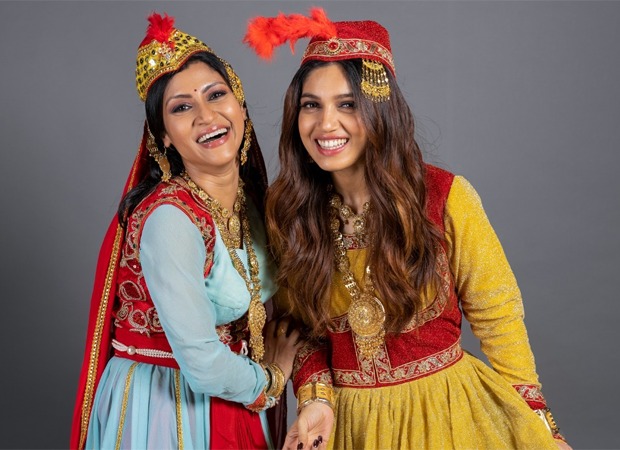 “Love you like I hate you” -- no two people will relate to this line more than two sisters. Netflix’s upcoming film, Dolly Kitty Aur Woh Chamakte Sitare, encapsulates this unique bond through a series of...well...interesting events, as two feisty, quirky women search for their freedom as they find their own way in the world. Konkona Sen Sharma and Bhumi Pednekar effortlessly slip into the roles of two cousins who will do whatever it takes to break the invisible shackles that are keeping them from the ideal lives they envision for themselves. Written and directed by Alankrita Shrivastava and produced by Balaji Telefilms the film is set to release exclusively on Netflix on 18 September 2020.

Konkona Sen Sharma in the titular role of Dolly is relatable and refreshing. Speaking of her character, the actor said, “Dolly’s life is one we see so often -- a bickering wife who is not satisfied with her husband’s unambitious ways, the mother of two young boys who she barely understands, all while dreaming of a life of luxury that is far beyond her reach. While she believes herself to be quite the rebel, she is blissfully unaware of how deeply conditioned she is in certain ways. It’s her journey of realization and that to freedom that makes the story a fun yet heartwarming ride.”

Bhumi Pednekar as Kajal aka Kitty is the quintessential small-town girl who comes to the city, expecting all her dreams to magically come true. Life, unfortunately, has other plans. “With a head full of dreams and aspirations along with a carefree attitude, Kitty embarks on a new journey with her sister. She discovers herself and evolves as a person, all the while stumbling and tripping along the way, to finally understand what it really takes to make her dreams a reality,” said Bhumi on playing Kitty.

Set in a newly developing industrial area on the outskirts of New Delhi, Dolly Kitty Aur Woh Chamakte Sitare, chronicles the quiet transgression of two cousins (women), who through their complicated love-hate equation, enable each other to find freedom.

ALSO READ: “Women are not supposed to be whitewashed in cinema” – says Bhumi Pednekar