Last Updated 08.02.2023 | 9:52 PM IST
feedback language
follow us on
Bollywood Hungama » Movies » Movie Reviews » Spider-Man – No Way Home (English) Movie Review: On the whole, SPIDER-MAN: NO WAY HOME is definitely a must watch. From a superhero for kids to leading the next phase of the MCU, Spider-Man had certainly come a long way.

Spider-Man – No Way Home (English) Movie Review: On the whole, SPIDERMAN NO WAY HOME is definitely a must watch. From a superhero for kids to leading the next phase of the MCU, SpiderMan had certainly come a long way.

On the whole, SPIDER-MAN: NO WAY HOME is definitely a must watch. It won’t be wrong to say that it has BLOCKBUSTER written all over it!

After much talk and hype the keenly awaited film SPIDER-MAN: NO WAY HOME finally hits screens this week. But with the film which promises to kick start the next phase of the MCU enthrall the audience is the question. 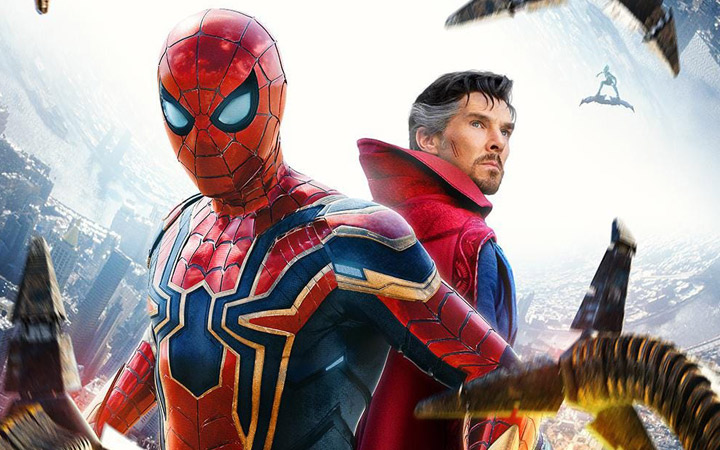 SPIDER-MAN: NO WAY HOME starts off with Spider-Man's identity now revealed, our friendly neighborhood web-slinger is unmasked and no longer able to separate his normal life as Peter Parker from the high stakes of being a superhero. When Peter asks for help from Doctor Strange, the stakes become even more dangerous, forcing him to discover what it truly means to be Spider-Man. Will Peter Parker survive the impending fight or will he be remembered as another one fallen is what makes up the rest of the film.

SPIDER-MAN: NO WAY HOME lives up to expectations. With an engaging first half and a rapidly progressing second, the film keeps the viewer in his seat. Over the past couple of weeks, the media and fans have been in a frenzy talking about what to expect from the film, but SPIDER-MAN: NO WAY HOME still manages to surprise you. It’ll be wrong to give out any plot point and hence it can simply be said that in the second half, the fans will be in for a treat. The goings-on are also unique and never before seen in a Marvel film or any other movie for that matter. The climax and the mid and post credit scenes also add to the fun and drama and make you excitedly wait for the future Marvel films.

Director Jon Watts has done a commendable job in retaining the humour, feel and sentiment from the previous MCU films. With plenty of action well interspersed with humourous breaks at key points keep the on screen proceedings light, edgy and gripping.

Speaking of performances, there are plenty of people to name, but keeping it just to the key individuals, Tom Holland, Zendaya, Benedict Cumberbatch, and Marisa Tomei have excelled in their given roles. A special mention for Holland who has done a fabulous job to depict the inner turmoil his character faces and has to endure. On the other hand, Jon Favreau seems to be terribly under utilized. Despite being a brilliant actor, Favreau seems to be relegated to a side role that helps with comic relief and being a scapegoat. Jacob Batalon as Ned does a commendable job as Peter Parker's best friend and comic interlude.

In terms of music, Michael Giacchino has done well to lend the visuals gravitas that keeps viewers glued. The CGI and VFX work are top notch and flawlessly executed making for a seamless visual spectacle. The dialogues deserve a special mention. The one liners are witty and funny and a few of them would be greeted with claps and whistles.

On the whole, SPIDER-MAN: NO WAY HOME is definitely a must watch. From a superhero for kids to leading the next phase of the MCU, Spider-Man had certainly come a long way. At the Indian box office, the tremendous hype and historic advance sales will result in possibly the biggest opening of the year and also a healthy lifetime. Hence, it won’t be wrong to say that it has BLOCKBUSTER written all over it!

Spider-Man: No Way Home returns to big screen with extended footage in September 2022

Box Office Prediction: Doctor Strange in the Multiverse of Madness set to be yet another big opener from Hollywood after Spider-Man: No Way Home

Tom Holland recalls his first Spider-Man: No Way Home rehearsal with Tobey Maguire and Andrew Garfield - "It was a roller coaster that I didn't want to get off of"