It was always meant to be an entertaining album. Ever since the promo of Sonu Ke Titu Ki Sweety came out, it was a given that the music would bring with it immense youthful appeal. With a good mix of yesteryear chartbusters as well as some latest hits coupled with original songs, the soundtrack with multiple composers, lyricists and singers turns out to be a foot-tapping affair. 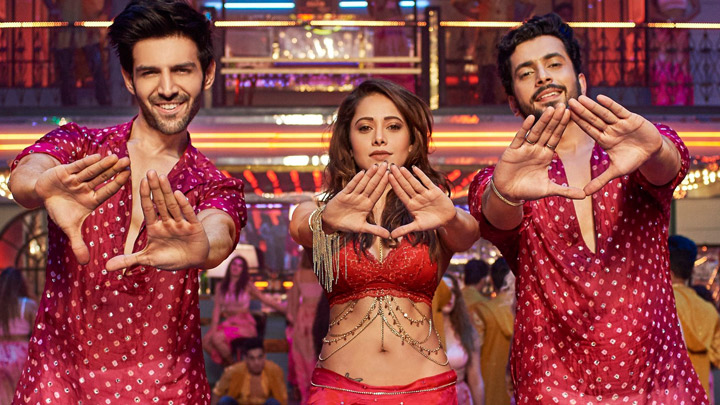 Hans Raj Hans' 'Dil Chori Sada Ho Gaya' was a major success many moons ago. Written by Sham Balkar and composed by Anand Raj Anand, the song has stayed on to be quite popular till date. Though recreated versions tend to stray more than stay connected to the original, Yo Yo Honey Singh's version 'Dil Chori' actually takes many steps ahead and ends up being a solid number. With Simar Kaur and Ishers joining the composer-singer, this one is an instant hit and is already leading from the top of the charts.

Yet another Hans Raj Hans-Anand Raj Anand number, 'Tote Tote Ho Gaya', from Bobby Deol's Bichhoo [2000] is presented in a new avtar, this time as 'Chhote Chhote Peg'. Yo Yo Honey Singh is the man in charge all over again and he along with Neha Kakkar and Navraj Hans ensures that there is no dull moment in this song that has additional lyrics by Singhsta and Oye Sheraa. This one too just picks a piece from the original track while spinning around an entirely new version. A popular number all over again.

An altogether original number makes an appearance at this point in the album with Amaal Mallik putting together 'Subah Subah'. A romantic number by Kumaar that is spearheaded by Arijit Singh, this one has Prakriti Kakar and Amaal Mallik joining the singer behind the mike. A beautiful soothing number that brings a 'thehrav' in the album after a couple of dance numbers, 'Subah Subah' is very easy on the ears.

As for some of the latest party numbers on the house, there is Zack Knight's chartbuster track 'Bom Diggy Diggy' that is brought into the fold. With Kumaar as his lyricist partner and Jasmin Walia joining him behind the mike, Zack Knight has already gained quite some popularity with this song during last few months. The song has a good lazy flow to it that works every time you listen to it and now that it is featuring in a major film for the youth as well, it is going to enjoy a much longer shelf life.

It is back to some hardcore dancing all over again with Guru Randhawa's 'Kaun Nachdi'. The start of the song somehow reminds one of 'Saddi Galli' [Tanu Weds Manu] but that's where the similarity ends as this one with Rajat Nagpal as Guru's composing partner and Neeti Mohan as his co-singer holds its ground right through its duration. A Punjabi number, this one fits in well into the film's mood, setting and ambience.

Punjabi flavor of the album is further strengthened with composer/lyricist/singer Rochak Kohli's 'Lakk Mera Hit' that has lyrics by Kumaar. Rest assured, the song would be aided by some eye catchy choreography that would appeal to young and family audience alike. Rendered well by Sukriti Kakar and Mannat Noor, 'Lakk Mera Hit' has additional vocals by Anita Bhatt. Though this one may not be the next big chartbuster in the making, it would keep the narrative of Sonu Ke Titu Ki Sweety fast paced for sure.

Composer Rochak Kohli and lyricist Kumaar come up with another song, though this time in an altogether different genre. Titled 'Tera Yaar Hoon Main', this one is a rather somber affair as it narrates the tale of a young man who is missing his childhood friend after a tiff. Rendered by Arijit Singh and Rochak Kohli, 'Tera Yaar Hoon Main' has additional vocals by Simerjit Kumar & Anita Bhatt and should fit in well into the narrative of the film to lend good situational appeal.

Saurabh Vaibhav composed 'Sweety Slowly Slowly' is the last song of the album and this one actually doesn't quite manage to reach the kind of high that other dance numbers in the album had before this. Written by Swapnil Tiwari, this one actually turns out to be an ordinary piece even though there is Mika Singh at the helm of affairs.

Sonu Ke Titu Ki Sweety is a rather loaded affair with as many as eight songs filling in the proceedings. Majority of songs end up working quite well, hence making it a wholesome winning affair.