A launch-pad is always special, especially so when it is that of a star son. Moreover, when the debut affair is a love story then you do expect soulful music as well. This is what makes one look forward to what does Sunny Deol has in store for the launch of his son Karan Deol along with newcomer Sahher Bambba. The good thing is that he brings on board hottest sensations Sachet-Parampara to put together the soundtrack with Siddharth-Garima doing the honours as the lyricists. Rishi Rich produces the music and his touch is quite visible in there. 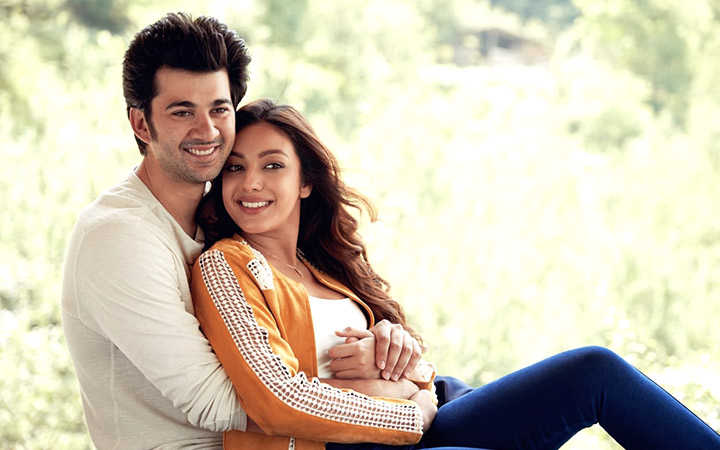 Newcomer Hansraj Raghuwanshi, who is known for his devotional songs, makes his Bollywood foray with 'Aadha Bhi Zyaada'. A number about living life to the fullest, this one is a peppy outing and in fact reminds one of 'Sochna Kya Jo Bhi Hoga Dekha Jaayega' from Sunny Deol's Ghayal. That song was rendered by Bappi Lahiri and incidentally Hansraj's voice pretty much sounds similar to that of the veteran composer-singer. Meanwhile, Karan Deol too makes an intermittent appearance as a rapper in this song which does carry the sound of 'Jai Bhole'.

The song that is set to become an anthem in time to come though is the title track 'Pal Pal Dil Ke Paas'. An excellent number that is very high on melody and showcases the best side of composers Sachet-Parampara, it has poetic lyrics by Sidharth-Garima that makes a very strong impression. Meanwhile, the song is made special due to the voice of Arijit Singh who is superb all over again and also Parampara Thakur who shows once again that other than being an efficient composer, she is also a very good singer.

No wonder, the song deserves to be heard in a repeat mode and that is evident in the kind of confidence that the makers have as well, what with 'Pal Pal Dil Ke Pass' arriving in as many as three more versions. Whether it is the second version, the 'celebration' version or the one which goes by the title 'Suun le Rabb', the song is beautiful every time it is heard and one just can't let the melody go off from one's mind and heart.

Composer Tanishk Bagchi makes a special appearance with a solitary number, 'Ho Jaa Awara'. He too demonstrates once again that there is a lot more to him than the recreated versions that he is largely known for, what with this one turning out to be yet another beautiful number in Pal Pal Dil Ke Paas. Monali Thakur is the one who kick-starts the proceedings for the song and somewhere also reminds one of the kind of pitch that Hema Sardesai used to take in her songs back in the 90s. Ash King is her accompanying partner in this peppy-n-sweet outing.

It is back to Sachet and Parampara and this time around other than being the composers, they are also the singers for three songs in a row. First to arrive is 'Ishaq Chaliya' which has a good hook to it and makes one tap feet instantly. A Punjabi-Hindi number, this one has a good pace as well and lends a happy sound to the overall outing. A difficult song to sing, especially the manner in which Sachet brings on the hook words, this one takes a bit of time to grow on you but eventually you get a good hang of it.

This is followed by 'Dil Uda Patanga' which has Parampara Thakur taking the lead and Sachet Tandon joining her soon enough. A song which has a teenage feel to it with an Indi-pop flavour, there is certain innocence to it that should work with the teenagers if the film manages to strike a chord with the audiences. Play this one loop and you won't be disappointed at all.

Third song that arrives in the voice of Sachet and Parampara is 'Maa Ka Mann' and this one is a devotional piece with a difference. While the sound of 'Satnam Shri Waheguru' keeps playing in your mind during the track's duration, you like the manner in which there is a soulful feel being carried. This one should make for a good situational piece in the film's narrative.

The music of Pal Pal Dil Ke Pass was expected to be good but the soundtrack actually goes on to exceed expectations. Sahcet-Parampara, Sidharth-Garima and Richie Rich do quite well in their biggest album till date where they are entrusted to put together music for the two newcomers. There is certain consistency in the film's music and that is always on the cards as well when there is a single team put together in charge instead of multiple composers, lyricists and singers. This one is a winner.