MONICA O MY DARLING works due to great performances, tight script, twists, music. However, has a comparatively weaker second half.

MONICA O MY DARLING is the story of a man who gets entangled in a conspiracy. Satyanarayan Adhikari (Vijay Kenkre) heads the Unicorn group, based in Pune. It has created a state-of-the-art robot, with the help of Jayant Arkhedkar (Rajkummar Rao). Satyanarayan is so happy with his work that he promotes him to the board of directors, much to the annoyance of Nishikant Adhikari (Sikandar Kher), Satyanarayan’s son. Satyanarayan has one more child – daughter Nikki (Akansha Ranjan Kapoor) – and she’s in love with Jayant. Jayant doesn’t love her but is dating her so that he can marry her and then one day, usurp the Unicorn empire. Monica Machado (Huma S Qureshi) works in Unicorn and Jayant gets attracted to her. They have a fling. One day, Monica informs Jayant that she is pregnant with his child and that he should pay the maintenance for her as well as the child. Jayant is scared and he agrees. The next day, he gets a letter from an unknown person, asking him to come to a Khandala hotel if he doesn’t want his affair with Monica to get exposed. Jayant reaches there and realizes that it was Nishikant who had written the letter to him. Nishikant is not alone in the hotel room. He’s accompanied by Arvind Manivannan (Bagavathi Perumal) from the accounts department. Nishikant informs Jayant that Monica has blackmailed him as well as Arvind. Hence, Nishikant convinces them that they should murder Monica, or else she’ll keep blackmailing them for life. They are reluctant but nevertheless agree as they don’t want to ruin their relationship with their respective partners. As per the plan finalized by them, Nishikant will kill Monica in a mill owned by Unicorn in Mumbai. Jayant will come to the mill, collect the body and head to Khandala. In Khandala, Arvind will dispose of the body. On the night of the murder, Jayant reaches the mill and sees a body, wrapped in a tarpaulin sheet, is placed on the foot. Assuming it’s Monica’s mortal remains, he collects it and transports it to Khandala. The body is then disposed of. The next day, an investor meeting takes place in the Unicorn office. Jayant and Arvind both are present, and they get the shock of their lives when they see Monica walk in! They are astonished not just to learn that she is alive but are also wondering whose body they transported and disposed of. What happens next forms the rest of the film. 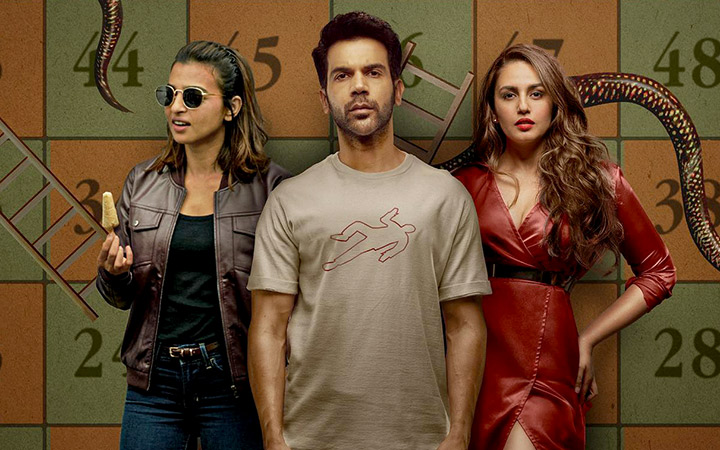 MONICA O MY DARLING is an adaptation of the Japanese novel ‘Burūtasu No Shinzou’ written by Keigo Higashino. Yogesh Chandekar's story is thrilling and has loads of twists and turns to keep the viewers hooked. Yogesh Chandekar's screenplay does justice to the plot at hand. Despite so much gore and murder in the script, the writer keeps the mood light and adds humour in adequate doses. On the flipside, a few scenes could have been better and less predictable. Yogesh Chandekar and Vasan Bala's dialogues are well-worded and contribute to the humour quotient.

Vasan Bala's direction is praiseworthy. The Sriram Raghavan stamp is all over the film, be it the Pune setting or the way the murders take place in the film, possibly because he was associated with the film at one point (he is also mentioned under ‘Special Thanks’). However, Vasan has added his own quirks as well and it makes for a fun watch. The film has too many characters, back stories etc. but Vasan has handled it in such a manner that not even once do the proceedings get confusing. He has also done justice to the retro element. The tribute to Alfred Hitchcock’s classic PSYCHO [1960] in a shot is impressive.

On the flipside, the film drops a bit in the second half. Too many murders take place, and it becomes convenient after a point. ACP Naidu’s investigation scenes are funny but it's bewildering to see so many murders taking place in such a short span and she takes things coolly, with no pressure from her seniors. Shalu (Zayn Marie Khan) and Gaurya’s (Sukant Goel) track is difficult to digest especially how quickly they get married, especially after what Shalu goes through six months ago. Another issue is that the makers have needlessly made a few scenes predictable. By shortening a few scenes or hiding a few details, the impact would have been better in these scenes. Moreover, Jayant’s behaviour and action also seem unconvincing in the second half. Due to these minuses, the second half gets a bit messy. Lastly, the film is a niche fare and not meant for all sections of the audiences.

MONICA O MY DARLING starts on a shocking note. The 'Yeh Ek Zindagi' song sets the mood. The Khandala room sequence is hilarious, and the way Nishikant convinces Jayant and Arvind to agree to the murder plan is damn good. The track where Jayant jumps cities to execute the murder plan gives a déjà vu of Johnny Gaddaar [2007; it also gets a tribute in a scene in the film]. But it's handled well and hence, there are no complaints. The multiple twists just before the mid-point are exciting. In the second half, things go a bit downhill, but a few scenes stand out like Jayant trying to retrieve a copy of the ‘murderer’s agreement’, the madness at Monica’s place and the robot facility. The last scene is quite good.

MONICA O MY DARLING is embellished with bravura performances. Rajkummar Rao is in top form and handles the lead part with panache. Huma S Qureshi leaves a tremendous mark and is surely one of her most accomplished performances. Radhika Apte (ACP Naidu) has limited screen time and has a difficult role at hand. But she pulls it off effortlessly and her comic timing is spot on. Akansha Ranjan Kapoor, too, puts up a fine show. Sikandar Kher is rocking in a cameo and viewers would wish that he had a longer role. Bagavathi Perumal is impressive. Sukant Goel (Gaurya) is fine though his track has some loose ends. Zayn Marie Khan (Shalu) is decent. Shiva Rindani (Tamang Rana), Vijay Kenkre, Faisal Rashid (Faridi Baig), Shiv Chauhan (Dev Prakash), Devendra Dodke (Sub-inspector Shende) and Rashmi Phanse (Savitri; Arvind's wife) are fine. Abhimanyu Dassani and Radhika Madan feature in special appearances.

Achint Thakkar's music is highly impressive, and the retro touch makes the album memorable. 'Yeh Ek Zindagi', sung by Anupama Chakraborty Shrivastava in Asha Bhosle style, is the best of the lot. This is followed by 'Farsh Pe Khade' and 'Bye Bye Adios'. 'Love You So Much' is fine but is well shot. 'Suno Jaanejaan' is also worth listening to. Achint Thakkar's background score is old-school and enhances the excitement.

Swapnil S Sonawane's cinematography is neat. Abhilasha Sharma's costumes are glamorous, yet realistic. Action is sans any gore. Mansi Dhruv Mehta's production design is authentic and does justice to the theme and genre. Atanu Mukherjee's editing is sharp.

On the whole, MONICA O MY DARLING works due to the exceptional performances, tight script, unpredictable twists, retro-style music and taut direction. However, the film suffers a bit due to a comparatively weaker second half.

EXCLUSIVE: Radhika Apte shares how she keeps herself grounded; says, ‘People are doing well and the next day they don't have a home’