Vishesh Films, headed by Mukesh and Mahesh Bhatt, are known for their small-budget, high-concept films. They have given some memorable films and chartbuster songs but since the last few years, their reputation has taken a beating. None of their films after the blockbuster AASHIQUI 2 [2013] have worked well. The number of films made by the banner has also reduced. Their last film, BEGUM JAAN [2017], released almost one-and-a-half-years ago. Now they are back with JALEBI, which promises to be a clean, romantic love story, and also it’s miles away from the erotic and horror films that had become their trademark. So does JALEBI touch the hearts of the viewers? Or does it fail to stir their emotions? Let’s analyse. 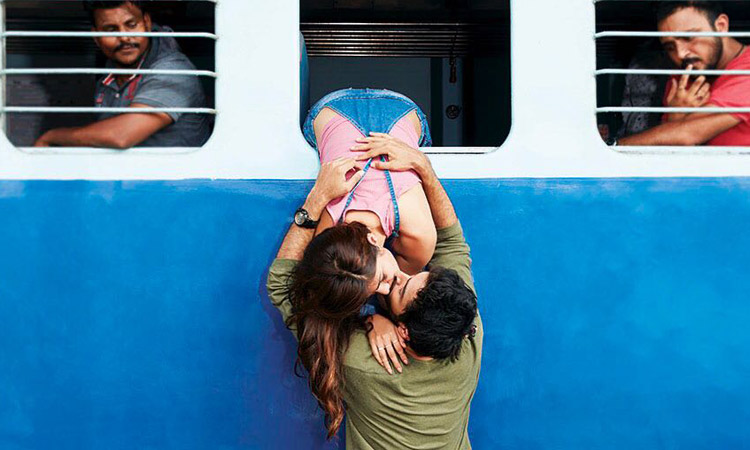 JALEBI is the story of love and separation. Ayesha Pradhan (Rhea Chakraborty) is a depressed girl. She has written a bestselling novel but her troubled past is not allowing her to focus and write her next book. She is on her way from Mumbai to Delhi for a book reading session. In the train, her co passenger is Anu (Digangana Suryavanshi) and her daughter Pulti (Aanya Dureja). Over the course of their conversation, Ayesha gets a jolt upon learning that Anu’s husband is none other than her ex hubby Dev Mathur (Varun Mitra). The story goes back seven - eight years. Dev is from Purani Dilli where he does guided tours. He’s proud of his roots and proudly flaunts his locality and also his mansion, popularly known as Netaji Ki Haveli. Once, Ayesha takes this tour and falls for Dev. Dev also develops feelings for her. In no time, they get married and that’s when cracks begin to develop in their relationship. Meanwhile, in the present day, the train halts at Bhusawal railway station and Dev enters their coach to give Anu a surprise. The ex-lovers, that is Dev and Ayesha, thus come face to face after all these years. What happens next forms the rest of the film.

Just like BEGUM JAAN, JALEBI is also a Bengali film remake, of Prosenjit Chatterjee-Rituparna Sengupta starrer PRAKTAN [2016], which was written by Nandita Roy and directed by Nandita Roy and Shiboprosad Mukherjee. Here in Hindi, Kausar Munir and Pushpdeep Bhardwaj's story is disappointing and juvenile. There’s no head and tail to the story and they do total injustice to the original film. Kausar Munir, Pushpdeep Bhardwaj and Suhrita Sengupta's screenplay is the biggest culprit. The film is bland and the trio have made no attempt to make situations exciting or novel. Kausar Munir, Pushpdeep Bhardwaj and Suhrita Sengupta's dialogues are horrible to say the least. The manner in which the characters are talking to each other is laughable.

Pushpdeep Bhardwaj's direction is amateur and he doesn’t even know the basics properly it seems. The way the film moves back and forth especially when Ayesha would hear a term or hear a song is so convenient and outdated. And the post-marriage problems are akin to saas-bahu drama shown on television but even those daily soaps are more entertaining and even progressive than this film.

JALEBI is terrible from the word 'Go'. The film begins with a loud cry of Ayesha on the black screen and hence, even before the first visual, the film gets unsettling! The beginning portion of Ayesha crying over abandoning her marriage is weird. Once the train portions begin, one hopes for the film to get a bit better. Also, there are 3 subplots involving various passengers in the bogie. They seem interesting and you expect them to add to the film, in case the lead protagonists aren’t able to. Sadly, these three tracks are boring and contribute in no way to the film. The flashback portion begins well. Dev showing his house to the tourists is nicely done. Also the way Ayesha books the entire tour for herself just so that she can spend all the time with Dev is lovely. Once they get married, the film becomes routine and showcases problems beaten to death in films. The miscarriage portion is also poorly executed. The train portions aren’t that interesting, although few developments are a bit unpredictable. If you expect the climax to at least lift the film to some extent, you’ll be dejected. The Kashmir sequence makes no sense and even more senseless is the justification given by Dev in the end.

Varun Mitra is disappointing. He looks weird in the scenes where he has to cry and even when he’s seen celebrating his wife’s pregnancy. In the beginning scenes, he does well. The actor has done well in the past, in Ishaan Nair’s unreleased film KAASH [2015]. So, here, the fault could be of the director in failing to get better performance from him. Rhea Chakraborty is what makes the film bearable. She has done chirpy roles in the past and JALEBI is the first time she is seen in a serious, mature role. She is the only one to benefit from this film as she proves that she can do a lot more than comic capers and special appearances. Digangana Suryavanshi is alright while Aanya Dureja is sweet. Arjun Kanungo (Arjun) is okay and his track makes no sense. Farida Dadi and Yusuf Hussain (the old couple in train) are fine but are letdown by the script. What exactly are they doing in the film one wonders. Poorti Arya (Renu; Dev’s sister) and the actor playing Dev’s mother are forgettable.

Music also gets thumbs down, which is sad, since Vishesh Films was known for its songs. 'Tum Se' is catchy but it’s not going to linger in one’s mind for long. 'Tera Mera Rishta' is played during the courtship scenes, which as mentioned above, was the only good part of the film. The rest of the songs like 'Mujhme', 'Pehle Ke Jaisa', 'Pal' and 'Mera Pyaar Tera Pyaar' are nothing special. Raju Singh’s background score is bad. Same goes for Manoj Soni's cinematography – few shots are taken from a very close range. The VFX is tacky and anyone can make out that the scenery seen from the window is fake. Sandeep Suvarna's production design is alright and the set does look like an actual First AC bogie. But it’s funny to see the railway station being so empty in the end, and that too the busy Hazrat Nizamuddin Railway Station of Delhi. Devendra Murdeshwar's editing is not good and even the film that’s just 112 minutes looked like a three-hour-plus film.

On the whole, JALEBI will leave you with a bitter taste. It’s a film that has no plot or logic. At the box office, it will be a disaster. Skip!