Since 5-6 years, dating apps have become an important part of our lives. Many have had ugly experiences or have failed to find a decent match, but at the same time, there are those who have managed to meet their soul mates on it. Interestingly, not many films in Bollywood have spoken about this aspect. INDOO KI JAWANI, starring Kiara Advani, however, takes up the challenge and is based on this aspect. Of course, the film is much more than the dating app and promises to have a comical twist. Also, it’s a significant film as it’s the second Hindi film, after SURAJ PE MANGAL BHARI, to release in cinemas in the post-pandemic season. So does INDOO KI JAWANI manage to entertain audiences? Or does it compel the audiences to swipe left? Let’s analyse. 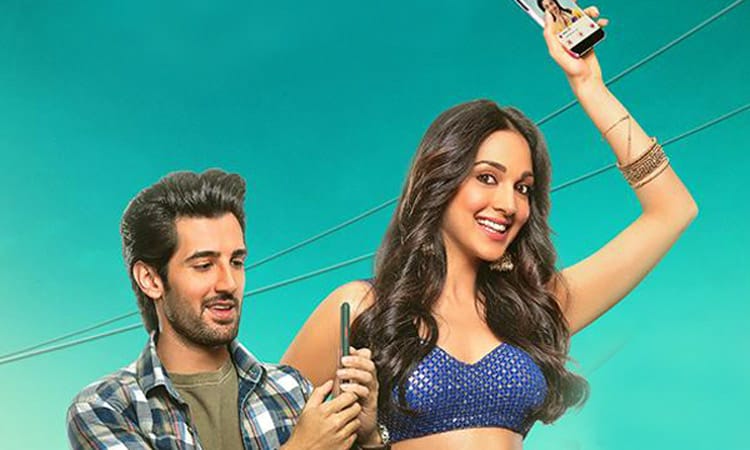 INDOO KI JAWANI is the coming-of-age story of a girl who experiences life through misadventures and dating apps. At the Delhi-Ghaziabad border, cops try to stop a Black Scorpio car at the check post. But the occupants of the car refuse to show their identity and escape. They also fire at a cop. The cops led by Avinash Nigam (Iqbal Khan) find the car outside a house. The terrorists are nowhere to be seen but the police find explosives inside. Soon they find one occupant of the car, a Pakistani, and the hunt begins to find the second person. Meanwhile, in Ghaziabad, Indira Gupta aka Indoo (Kiara Advani) is having a tough time with her boyfriend Satish (Raghav Raj Kakker). Satish wants to sleep with Indoo but she is apprehensive. She then agrees to come to his house at night and later, has a change of mind. Hence, a desperate Satish asks a girl from Indoo’s colony, Alka (Lisha Bajaj) to spend the night with him, despite the fact that Alka is getting married to someone else next week. Meanwhile, Indoo’s best friend Sonal (Mallika Dua) tells her that she should take the plunge and sleep with Satish. Hence, she lands up at Satish’s place but finds him in bed with Alka. Indoo breaks up with him immediately. At Alka’s wedding, Indoo is lusted by not just young boys like Kittu (Shivam Kakar) but also old-aged men like Prem uncle (Rakesh Bedi), Ranjit uncle (Rajendra Sethi) and Pran uncle (Chittranjan Tripathi). Kittu mixes alcohol in Indoo’s drink and this leads her to dance like crazy. Her reputation in her neighbourhood gets tarnished. The next day, Indoo’s parents (Rajesh Jais, Alka Kaushal) leave for Delhi to get the admission done for Indoo’s brother Bunty (Harsh Sharma). They request her not to do any more drama. A lonely Indoo, still sad about the break-up, agrees to Sonal’s idea of using a dating app to find a guy for one-night-stand. Sonal believes that this will help her in her next relationship. On the app, Indoo matches with Samar (Aditya Seal). After a brief chat, Indoo invites him home in the evening. The same day, she finds out from Prem uncle, Ranjit uncle and Pran uncle that a terrorist from Pakistan is roaming in Ghaziabad. In the evening, Samar reaches Indoo’s place. Samar turns out to be a thorough gentleman. Indoo attempts to get intimate with him but gets nervous. She calls Sonal who motivates her to seduce him. Indoo decides to do so and in the process, Samar’s passport falls from his jacket. This is when she sees that Samar is a Pakistani! This development terrifies her. She also wonders if he’s the same terrorist that the police are trying to find. What happens next forms the rest of the film.

Abir Sengupta's story is entertaining. The manner in which he has brought together dating apps, prejudices, mindset in small towns, terrorism and India vs Pakistan debate into a single film is quite praiseworthy. Abir Sengupta's screenplay is effective for most parts. It’s good to see that the writer has tried his best to ensure that the film doesn’t come off as a run-off-the-mill product. However, the film drags at a couple of places. One feels so especially in the first half. The trailer had depicted already that Indoo’s match is a Pakistani. This bit comes late, just before the interval. Hence, one wishes if the first half was tighter. Abir Sengupta's dialogues are witty and add to the humour quotient. The Indo-Pak debate dialogues could have been shorter as it was getting repetitive in the second half. Also, the term ‘jhanda gaadh diya’ is mentioned after every ten minutes and it frustrates viewers after a point.

Abir Sengupta's direction is neat and simple. It is also creatively done at places. For instance, the scene where Indoo chats with Samar for the first time on the app could ideally have been a normal, routine scene, shot probably in a coffee shop or Indoo’s residence. But Abir instead sets it in the middle of a busy Ghaziabad chowk where fights and chaos have caused immense madness. This actually enhances the impact. Also, the director focuses on how people in neighbourhoods in small towns tend to be nosy and prejudiced under the garb of being cultured. This is treated in a humorous manner but is a reality and this element is well utilized in the script. On the flipside, the finale is fun but could have been more thrilling. The idea of intercutting an action scene with the jagrata shots seemed clichéd. Also, using surrogate brand names like Fakebook, Dinder, Café Coffee Bay and Domato is very laughable. One wishes they had used original names (as they did with Limca and Aquagard) or maybe the makers could have used fictitious brand names.

INDOO KI JAWANI begins on an interesting note which makes it clear that Indoo has morals and values and that she is concerned about her image in the society. The animated opening credits are very nicely done. The first half then moves at a relaxed, slow speed. The film of course gets better when Samar and Indoo meet and when she discovers that he is from the ‘enemy country’. At first, it’s fun to see both of them debating about which country is better. After a point, it gets too much. The last 20 minutes are thrilling and the film ends on a good, funny note.

Talking of performances, Kiara Advani is adorable. She looks extremely cute and puts up a very entertaining performance. The manner in which she rants angrily throughout the film makes for a humorous watch. This film gives her a chance to showcase her acting talent and hence, it would surely help her in pushing her career ahead. Aditya Seal doesn’t have much to do initially in the first half but later makes his presence felt. He looks dashing and his dialogue delivery is spot on. Mallika Dua is hilarious and is great as the bestie with loads of gyaan about men, adult films and sex. Iqbal Khan leaves a huge mark and deserves to be seen more in films. Raghav Raj Kakker, who was loved for his role of ‘Karamchand’ in SCAM 1992, is fine. Shivam Kakar is a bit over the top. Rakesh Bedi, Rajendra Sethi and Chittranjan Tripathi are appropriate in the roles of lecherous uncles. Rajesh Jais, Alka Kaushal, Harsh Sharma and Lisha Bajaj don’t get much scope. Govind Pandey (constable Om Prakash Chautala) suits the part to the T. Ashok Lal (auto driver) is funny. Archana Shukla (Kittu's mother) is efficient. Jitendra Rajput (terrorist) has a crucial part and does well. Masood Ibrahim (Abhishek Singh) is okay.

Kiara on CONTROVERSIES around films: “If they’re getting a bit TOXIC then I…”| Indoo Ki Jawani

Music is not of chartbuster variety but is used well. 'Hasina Pagal Deewani' is foot-tapping. 'Dil Tera' is novel and beautifully gives homage to Bollywood. 'Single Ladies' is relegated to the background while 'Heelein Toot Gayi' appears during the end credits. Neel Adhikar's background score is in sync with the film’s mood.

A Vasanth's cinematography is sans complaints. Priya Suhass' production design gives the film a realistic touch. Amin Khatib's action is minimal and not too violent. Sheetal Sharma's costumes are very appealing, especially the ones worn by Kiara. Ajay Sharma's editing could have been crisper but nevertheless, he does a fine job.

On the whole, INDOO KI JAWANI is a fun-filled entertainer and deserves to be watched for its plot, realistic setting, humour and Kiara Advani’s adorable performance. At the box office, the positive word of mouth might result in an increase in footfalls over the weekend.