Amit Trivedi has recently scored well with his music for Manmarziyaan. Now he comes up with Andhadhun which has a different stage, setting and milieu to it. Instead of staying in the rustic zone, this one is expected to be more contemporary given the kind of theme that Andhadhun boasts of. Jaideep Sahni is the lyricist. 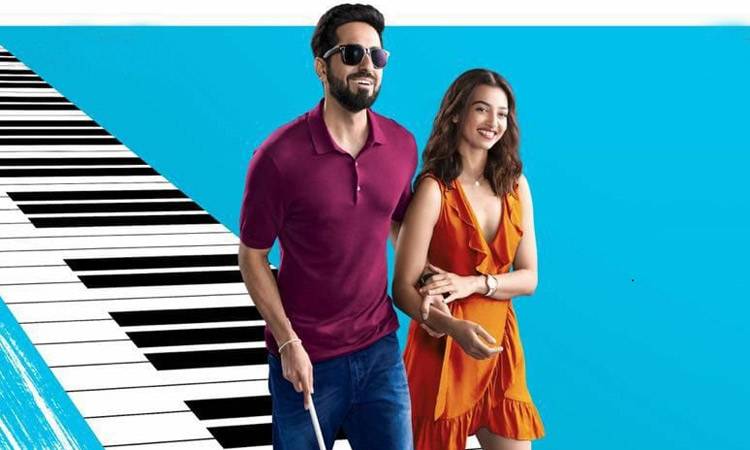 Andhadhun begins with a winner in the form of 'Naina Da Kya Kasoor'. A beautifully composed number which has a very peppy sound to it, this one is instantly catchy and reminds one of some such similar songs that were composed back in the late 70s and early 80s. With simple lyrics going for it and some able singing by Amit Trivedi himself, 'Naina Da Kya Kasoor' impresses in both the original and electronic versions.

The one that follows has a 90s feel to it as Abhijeet Srivastava and Aakanksha Sharma come together for 'Aap Se Milkar'. A love song about a couple coming close to each other after a chance encounter, this one defines the essence of love and togetherness quite well. Moreover, from the core hook perspective, it also faintly reminds of Yesudas' 'Aaj Se Pehle, Aaj Se Jyaada' [Chitchor]. Later the song also appears in a 'reprise' version by Ayushmann Khurrana himself and given the fact that the song has a very innocent feel to it, you like hearing it all over again.

It's the sound of piano which is heard right at the beginning of 'Woh Ladki' and though one expects an out and out romantic number here since the singer on the credits is Arijit Singh that is not really the case. As a matter of fact this one has a slow pace to it and alternatively moves between Indian and Western sound. At best a situational number which could go well with the film's theme, the song has a limited shelf life.

Since the film has Ayushmann playing a piano player, you get to hear its sound all over again in 'Laila Laila'. The start here is peppy and soon enough gets into the Amit Trivedi territory, especially with the composer-singer coming behind the mike himself. The line that impresses though is 'Mere dil ke bhi dil mein hai tu' and one wonders why this one wasn't actually the title of the song. A decent number.

With Shadab Faridi and Altamash Faridi in there, one expects a 'qawalli' in the offering. That's not really the case though as this one turns out to be a situational number which doesn't really make you root for it much. The tune is experimental for sure and you don't really get attached to the song. As a matter of fact by this time you also start wondering that whether a film like Andhadhun indeed needs as many songs.

Guest composer-singer Raftaar comes on board for 'AndhaDhun Title Track' and while the mandatory sound of piano is heard right at the beginning, soon enough it gets into a different zone altogether. A theme track which could well come during the end credit title rolls of the film, it complements the film's genre, stage and setting. Though one can't expect a listener to play it on loop, it does its job in the album well.

As for those who love piano pieces in isolation, there are also a couple of these in the form of 'AndhaDhun Theme 1' and 'AndhaDhun Theme 2'. Expect these to play as a part of the background score of the film.

Andhadhun begins well but then there is an overdose of songs in there due to which the soundtrack somehow loses the sheen that it gathered at the beginning. Nonetheless, there are a couple of songs in there which are lively and make for a good hearing on loop.