Popular South actor Yash, who played a key role in the KGF franchise, celebrated his 6th wedding anniversary with his wife Radhika Pandit on December 9. Though the actor is not an avid social media user, his wife Radhika Pandit often shared photos of the duo. As it was their 6th wedding anniversary, Radhika took to her verified social media handle and shared a bunch of photos, featuring the couple. 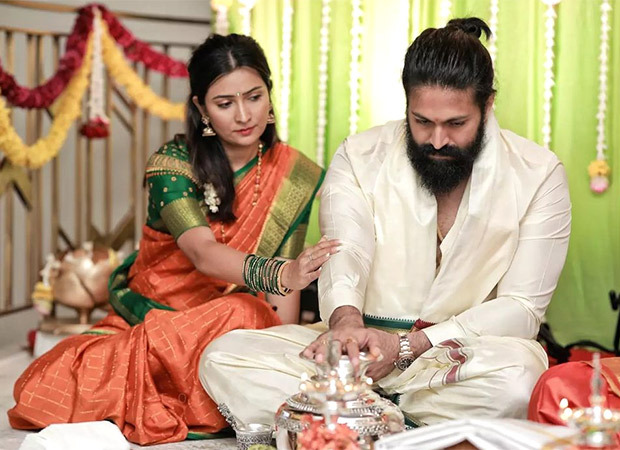 In the first and second pictures, the couple can be seen giving a romantic pose for the click. Meanwhile, in the third photo, they can be seen offering prayers together. In the later pictures, both are seen on a romantic getaway. On the other hand, the last picture showed the couple sitting inside their house in their casual outfits and playing a board game. The much-in-love couple looked stunning together.

Instagramming the photo, Radhika gave it a loved-filled caption, which read, “This is us.. we can be a lil filmy, a lil playful, a lil religious, a lil serious but a lot REAL.. Thank you for making these six years of married life with u magical yet Real (red-heart emoticon) Happy Anniversary. Love you.”

In no time, fans started showering love on the post and wishing the couple in the comments section. “Happy anniversary to the most cutest couple,” wrote a fan while another called them “most adorable couple.”

For the unversed, Naveen Kumar Gowda aka Yash and Radhika met on the sets of a television show titled Nandagokula and fell in love with each other. After dating for a while, they tied the knot on December 9, 2016. The duo is also parents to two wonderful kids, Ayra and Yatharv.

Coming to Yash’s professional front, the 36-year-old actor was last seen in the second instalment of the KGF franchise. Ever since the release of the film, he did not announce any of his upcoming projects, so far.