Project K is one of the most awaited films of Prabhas. The Bahubali actor will be seen alongside Deepika Padukone in this multi-lingual action entertainer. And now the production house, Vyjayanthi Films recently invited their leading man for their new office opening. Along with the actor, present at the venue were also some other big names from the Indian film industry which includes Jersey actor Nani, South actor Dulquer Salmaan, and KGF director Prashanth Neel. 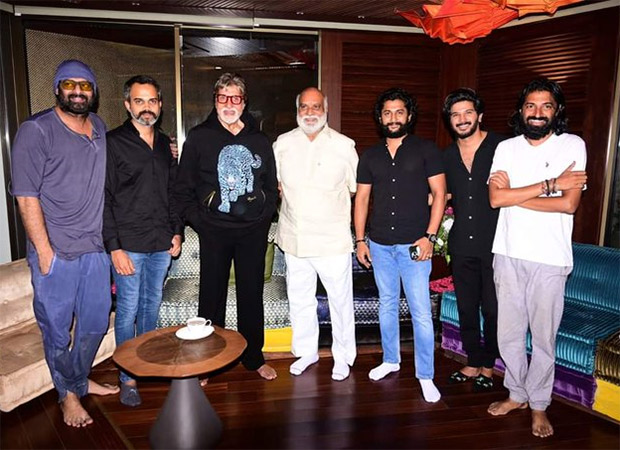 Production house Vyjayanthi Films opened a new office in Hyderabad recently and it was a star-studded affair with some big personas joining the event. Capturing many of these names in one frame, this photo of Amitabh Bachchan, Prabhas, Nani, Dulquer Salmaan, Prashant Neel, filmmaker Raghavendra Rao along with Project K filmmaker Nag Ashwin found its way to social media and it is definitely going viral. Since the photo appeared, fans have also been speculating whether this get-together at the office opening of Vyjayanthi Films have anything to do with Project K. Fans of the South cinema are wondering if the production house dropped this as a hint about any special appearances to be done by Dulquer Salmaan or Nani or both of them featuring in Project K.

Besides this, there are also a set of videos from the event that have been doing the rounds on fan pages. Although the makers have not announced or mentioned about anything, the photos and videos seem to have garnered ample attention. Readers would be aware that Prabhas will be working with Prashanth Neel for Salaar.

Speaking more about the big ticket entertainer Project K, the film will feature Deepika Padukone, Amitabh Bachchan, and Prabhas in lead roles. Not too long, it was also said that Disha Patani has joined the star cast. With a budget of about Rs. 400 crores, the film is expected to be made on a grand scale and will be shot in Telugu and Hindi.