Last Updated 30.01.2023 | 11:00 AM IST
feedback language
follow us on
Bollywood Hungama » News » South Cinema » Ram Charan jets off to Japan with his family to promote RRR

SS Rajamouli has been creating history in box office ever since the release of his magnum opus Baahubali. His recent release RRR also went on to break records with Ram Charan and Junior NTR showcasing great onscreen camaraderie. The film has been receiving immense globally too as many American celebrities have been showering praises on the film. While SS Rajamouli was recently in the US where his films were screened including this period drama, Ram Charan has taken off with his family to promote it in Japan. 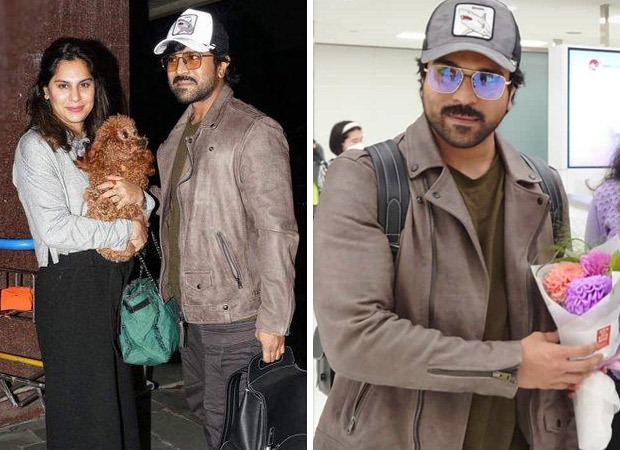 Readers would be aware that RRR is all set to release in Japan. And now a photo of Ram Charan along with his wife Upasana and his dog Rhyme. The trio were recently seen at the airport flying to Japan for the pre-release promotions of RRR. Despite the hectic schedule, Ram decided to take some time out from his shooting plans to take off to the Asian country to promote the epic drama that managed to break records at the box office and get popular globally. Besides its theatrical success, the film, that released on Netflix, also went on to create records on the streaming platform. Speaking about it SS Rajamouli had said, “The audience has proved its love for RRR once again, and it has been astonishing to see our labour of love being accepted by audiences around the world. We’re absolutely overwhelmed by the response RRR has received on Netflix.”

Coming to the film, RRR marked the South debut of popular actress Alia Bhatt and the film also featured Shriya Saran, Ajay Devgn, Olivia Morris, Ray Stevenson among others. The film focuses on the story of two revolutionaries, an ambitious police officer and a righteous vigilante who end up having an unlikely friendship which changes their lives forever. The film was also screened along with other SS Rajamouli films in Los Angeles recently.