A bigger offering than the hit Baahubali series is on its way and it is named RRR. The film that is said to be a visual spectacle is a magnum opus offering for the fans and has been scheduled for release on 7th January 2022. The film is set to be one of the biggest films of the next year and the fans have patiently waited for any and every update and the wait has now come to some fruition as the lyrical video of RRR mass anthem 'Naacho Naacho' is finally here. 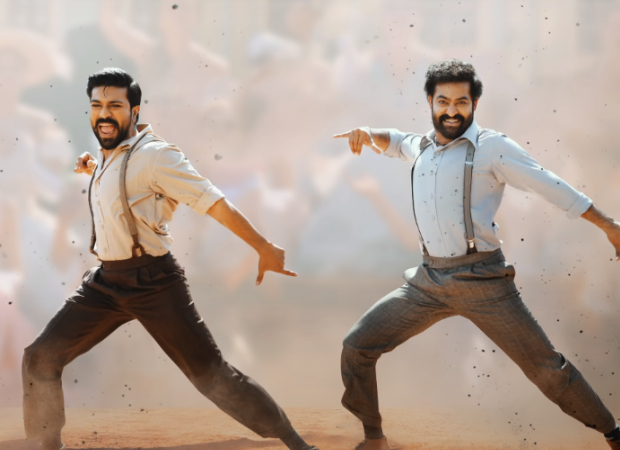 RRR film team today unveiled the much-awaited hit song RRR Mass Anthem. The catchy song was not the only thing up for offer as a lyrical video accompanied it. The tunes of the song are groovy and upbeat. The video also gives us a glimpse of Ram Charan and Jr. NTR shaking a leg together. The opulent set of the film is visible in the background. The film team along with SS Rajamouli, Ram Charan and Jr. NTR can also be seen interacting with choreographers and other crew members before putting in some high on energy movies and lighting up the mood and the song. The song features dance moves from Ram Charan and Jr. NTR, both of them will also share the screen space in the movie.

The film is set in pre-independence India, the film is a fictional take on the younger days of celebrated freedom fighters, Komaram Bheem and Alluri Seetharamaraju, portrayed by Jr. NTR and Ram Charan respectively. The biggest multi-starrer of India features, Ram Charan, NTR Jr along with Ajay Devgn, and Alia Bhatt. The project is helmed by SS Rajamouli, who was also the mastermind behind the record-breaking Baahubali series.

PEN Studios has bagged the theatrical distribution rights across North India and has also bought worldwide electronic rights for all languages. Pen Marudhar will be distributing the film in the North Territory.

RRR will hit the screens worldwide on 7th January 2022.

ALSO READ: Ram Charan and Shankar wrap up the first schedule of RC15