Superstar Rajinikanth on Wednesday shared pictures from his meeting with Prime Minister Narendra Modi and President Ram Nath Kovind. He met the top leaders in Delhi, where he had gone to receive the prestigious Dadasaheb Phalke Award. 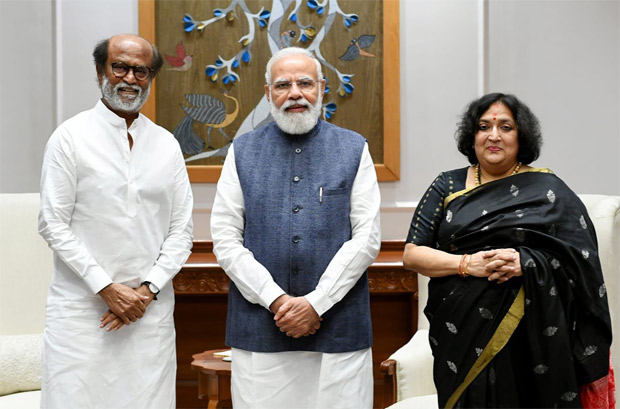 Sharing the photos on his Twitter handle, Rajinikanth wrote, “I am happy that I met the President and the Prime Minister and received their congratulatory messages.”

The 70-year-old superstar was honoured with India’s highest cinema award Dadasaheb Phalke Award at the recently held 67th edition of the National Film Awards. The film icon received a standing ovation at the ceremony and expressed his gratitude to his elder Sathyanarayana Rao Gaikwad, his old friend Raj Bahadur and late filmmaker K Balachander.

Rajinikanth mentioned that it was his friend Raj Bahadur, who lives in Karnataka, that first identified his acting talent and encouraged him to join a film institution. And then, it was Balachander who rechristened Shivaji Rao Gaekwad as Rajinikanth and introduced him to the world with the 1975 relationship drama Apoorva Raagangal.

It’s been more than four decades since Rajinikanth has remained the most bankable superstar of Indian cinema and he continues to redefine his on-screen image to suit the fast-changing cinematic taste of the current generation.

As the superstar arrived in Chennai on Tuesday night amid a lot of fanfare, his fans had gathered outside his residence to greet the actor.

Meanwhile, on the work front, Rajinikanth is looking forward for the release of his upcoming film, Annaatthe, which is scheduled to have a theatrical release on November 4, coinciding with the Deepavali festival.