Yash and Radhika Pandit have already given us some major relationship goals on their social media! While they are gearing up to welcome their second child, they are also sharing many photos of their first born – Ayra Yash. Their Instagram is filled with shenanigans of their little one and now, Radhika once again has been receiving a lot of comments from fans for sharing this adorable photo of the KGF Chapter 1 actor and little daughter Ayra. 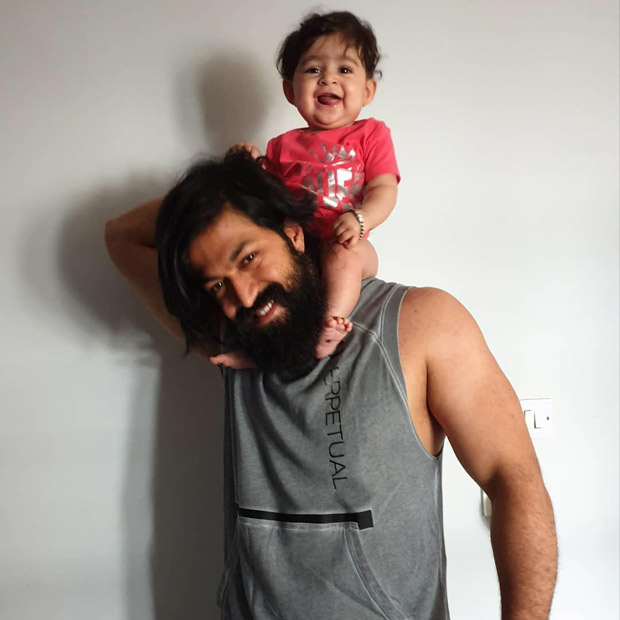 A recent photo of Yash and Ayra Yash on Instagram that has grabbed attention is this one where the little angel is gladly sitting atop her father’s shoulders. It seems that this is the new way of exercise for the fitness lover KGF star. Radhika Pandit posted this photo saying, “Best form of workout!! ?? #radhikapandit #nimmaRP.”

Besides this, the couple has shared many photos in the past of Ayra:

Hi everyone.. I am finally getting a Name.. U guys were so sweet to suggest so many lovely names! Keeping that in mind my parents have come up with a beautiful name for me.. let's wait till June 23rd to find out!! ???? !! Love, Baby YR. #radhikapandit #nimmaRP

My morning dose of happiness ❤️

On the work front, after the stupendous success of KGF Chapter 1, Yash is now gearing up for its sequel, KGF Chapter 2. He had earlier shared a post confirming that the film has gone on floor and that he has also kicked off the shooting for this Farhan Akhtar and Ritesh Sidhwani production. The film will retain some of its earlier stars including leading lady Srinidhi Shetty but it will also have some new additions. Reports have it that the latter will include some Bollywood stars like Sanjay Dutt and Raveena Tandon but there has been no official confirmation on the same. On the other hand, his wife Radhika Pandit starrer Adi Lakshmi Purana released last week.

Also Read: KGF star Yash and Radhika Pandit announce the arrival of their second baby in the most unique and fun way; baby Ayra is a part of it too!