The action adventure Kantara, produced under the banner of Hombale Films by Vijay Kiragandur and written-directed by Rishab Shetty, has been garnering immense response across quarters. The film, which was initially released only in Kannada, further went on to be released in multiple languages owing to its popularity. Besides Rishab in the lead role, the film also stars Sapthami Gowda, Kishore Kumar G and Achyuth Kumar in pivotal roles. And now we hear that the film is all set to release on OTT in Amazon Prime Video this month, on November 24. 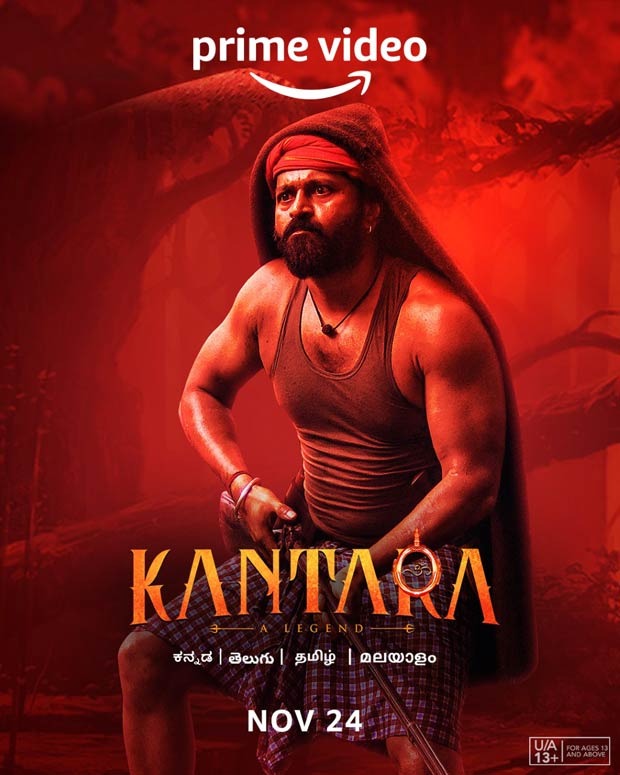 Kantara to premiere on Prime Video on November 24

Prime members in India and across 240 countries and territories can stream the thriller Kantara in Kannada, Telugu, Malayalam, and Tamil from November 24, 2022, exclusively on Prime Video. Coming to the story of Kantara, the film is set around a small community living in the woodlands of Kaadubettu in the southern coastal state of Karnataka. Weaving an interesting plot of human versus nature conflict, where a death leads to war between villagers and evil forces and Shiva, a rebel defends his village and nature.

On the digital release of Kantara, writer, director, and actor Rishab Shetty shared, "Audiences from all corners of the country have showered immense love on Kantara and I am extremely excited that with its global digital premiere on Prime Video we will be able to take our labor of love and hard work to a wider audience worldwide. It is a story that has universal appeal but the plot's local flavor will keep viewers intrigued until the very end!"

Producer Vijay Kiragandur added, "At Hombale Films, we are always looking at telling engaging tales in the extraordinary yet relatable manner. Kantara is yet another film by us that has touched hearts of audiences from varied regions and backgrounds. Rishab and the entire cast and crew has worked incredibly hard to create this beautiful film and we are delighted to take it to audiences across the globe through the exclusive launch on Prime Video."

Kantara will join the thousands of TV shows and movies from Hollywood and Bollywood in the Prime Video catalogue. These include Indian-produced Amazon Original series and movies such as Maja Ma, Hush Hush, Crash Course, Panchayat, Modern Love series, Suzhal - The Vortex, Guilty Minds, Mumbai Diaries, The Family Man, among others.]