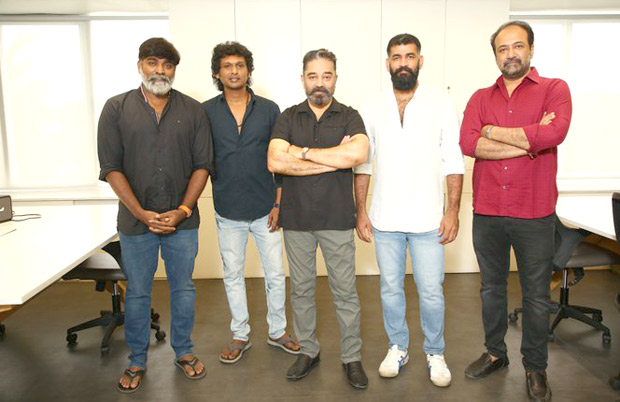 Director Lokesh Kanagaraj was seen interacting with Kamal Haasan and Vijay Sethupathi in the images. Kamal is not only starring in but also financing the film, which is described as an out-and-out action spectacle. Fahadh Faasil is slated to join the set soon.

The first look of Kamal Haasan, Vijay Sethupathi, and Fahadh Faasil was unveiled a week ago. The protagonists were depicted on the poster as battle-hardened soldiers who were no strangers to blood and brutality.

The film also stars Antony Varghese, Narain and Arjun Das among others. If everything goes according to plan, the film will open in cinemas next summer.

Meanwhile, Kamal Haasan's Indian 2 has been stalled in production hell for over a year. And the big-budget project's fate is still undetermined.

Vijay Sethupathi has a number of projects in the works in his pipeline. Tughlaq Durbar and Laabam, two of his films, are predicted to be OTT. He also appears in the upcoming romantic comedy Kaathu Vaakula Rendu Kaadhal, Vetri Maaran's political thriller Viduthalai, and Santosh Sivan's Hindi feature Mumbaikar, all directed by Vignesh Sivan.

Also Read: “I think Dilip Kumar gave up 40 years too early, thereby, depriving us of many path-breaking performances that may have happened” – Kamal Haasan pays tribute