Suniel Shetty is enjoying this new phase in his life while working in different kind of movies. The actor is getting villain roles in the South industry. It is known that it will be Suniel Shetty vs Rajinikanth in AR Murugadoss directorial Darbar which is going to be a cop drama. The filming began in mid-April 2019 with Rajinikanth and Nayanthara. The action thriller will see Rajinikanth's IPS officer character face-off with Suniel Shetty who is a corporate giant. 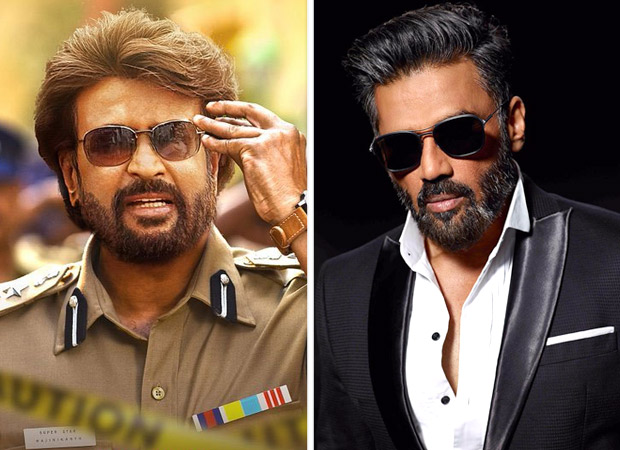 In the latest schedule, Rajinikanth and Suniel Shetty are shooting an action sequence in South Mumbai. After many pictures were leaked from the sets of the film, AR Murugadoss has beefed up the security. But, according to sources, a day ago, the two stars were shooting a car chase sequence which is a major face-off. They have been shooting for four days and yesterday's scenes were crucial for the climax. The chase sequence was shot with the actors and body doubles. It shooting went on till 6 am in the morning.

The source added, "Suniel Shetty aka Anna will be joining for the action sequence which has been planned in the city of Mumbai. After Akshay Kumar now, it’s Suniel who is fondly known as Anna in Rajnikanth’s next titled Darbar sources also reveal that loads of preparation are being done in front of this action flick. Suniel Shetty returns playing antagonist after Main Hoon Naa."

Suniel Shetty has been working in South films for a while. The actor is set to make his Kannada debut with the Kichcha Sudeep starrer Pehlwaan. He will be starring in Priyadarshan's period drama Marakkar: The Lion Of Arabian Sea starring alongside Mohanlal.