Allu Arjun's recent release, Pushpa: The Rise has been the talk of the nation since its release as everyone is all praises with the actor's portrayal of 'Pushpa Raj'. Now, Amul India also gave a shoutout to the film. 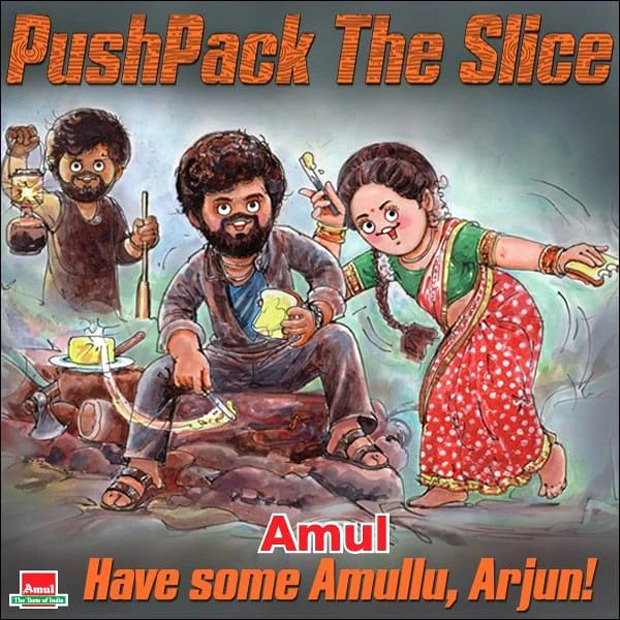 Allu Arjun reacts to Amul giving shoutout to Pushpa: The Rise with their new topical

Amul took to their social media to share a cartoon of Allu Arjun as Pushpa, Rashmika Mandanna as 'Srivalli', and Fahadh Faasil. At the bottom, they wrote, "Have some Amullu, Arjun!" They captioned it, "#Amul Topical: New action-drama film is a huge hit." Allu Arjun too commented, "Allu to Mallu to Amullu Arjun."

A post shared by Amul - The Taste of India (@amul_india)

Under their Amul Topical hashtag, they share cartoons of the highest trending topics which is why they gave a shoutout to Pushpa as the film is all that everyone is talking about.

Pushpa: The Rise is an Indian Telugu-language action drama film starring Allu Arjun, Fahadh Faasil, and Rashmika Mandanna in lead roles. The film has minted over 300CR worldwide and is still running strong. The film is directed by Sukumar. Produced by Naveen Yerneni and Y. Ravi Shankar the film is now streaming on Amazon Prime Video.

ALSO READ: After Pushpa, Hindi dubbed version of Allu Arjun starrer Ala Vaikunthapurramuloo to release in cinemas on January 26, 2022