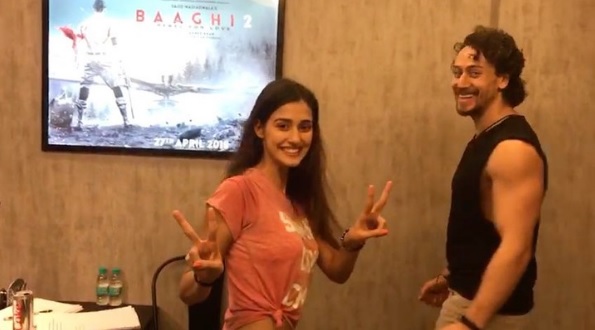 Tiger Shroff had a rocking debut with Heropanti in 2014. The film turned out to be a huge success but Tiger’s next film, Baaghi, was an even bigger hit and was loved for its superlative action, intensity, romance and the songs. On television too, it became one of the top rated films of 2016. It’s no wonder that the producer, Sajid Nadiadwala, announced a sequel to Baaghi. Titled Baaghi 2, it will be directed by Ahmed Khan, instead of Sabbir Khan who directed the first part. Hottie Disha Patani has replaced Shraddha Kapoor as the film’s leading heroine.

The film is yet to go on floors but the prep for the film is going on in full swing. Disha Patani yesterday gave everyone a sneak peak of it by posting a small, funny video. The video clip features Tiger Shroff and Disha Patani’s back facing the camera. They are singing some tune, which probably might be the theme of Baaghi 2. They then turn around and face the camera. While Disha Patani shows the victory sign with both her hands, Tiger Shroff flexes his muscles. Both then leave the frame and the camera then zooms on to the first look of Baaghi 2.