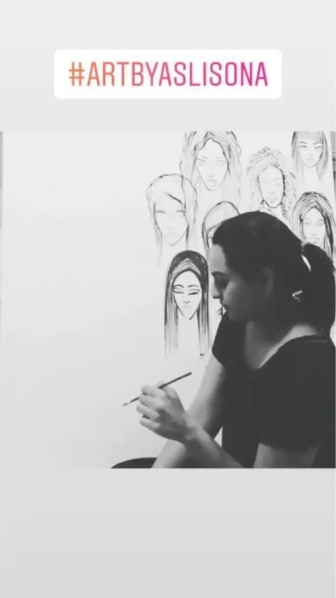 A few years ago, Salman Khan surprised everyone by revealing that he loves to paint. Later, pictures of his artworks were out and they turned out to be excellent. His fans always loved his performances and his ‘Being Human’ side and now they had another reason to love him more.

And now, Salman Khan’s protégé Sonakshi Sinha has also turned into a painter. Before she became an actress, Sonakshi Sinha was pursuing fashion designing. She was always interested in art and she has revealed that her textbooks in school used to be full of doodles. But now, she has taken her passion one step up. The talented actress, who was always good at sketching, has now started experimenting with paints and colours. She started doing this one-and-a-half-years ago. She revealed that she began with abstract art and later moved to faces of women and animals.

Interestingly, Sonakshi Sinha even auctioned one of her paintings last year to raise money for breast cancer patients. A plan to exhibit her work is also on the anvil. The actress stated that when she’s painting, she is not thinking. The energy just flows through her and for her, it’s akin to meditation.

Sonakshi Sinha has gifted five of her paintings to her family and close friends. Now that her secret is out, everyone around her has been demanding her for it. She then tells that she gets the urge to paint at the strangest of times. She even paints if she’s really tired and she needs to forget the day as it refreshes her.

On the work front, Sonakshi Sinha will be seen in Crazy Hum, which deals with all the fun and madness associated with ‘IIFA Awards’. It also stars Diljit Dosanjh and has Karan Johar in a supporting role. Her other release of the year is Happy Bhag Jayegi Returns, the sequel of the 2016 sleeper hit Happy Bhag Jayegi. The film also stars the leading lady of the first part, Diana Penty and is directed by Mudassar Aziz.