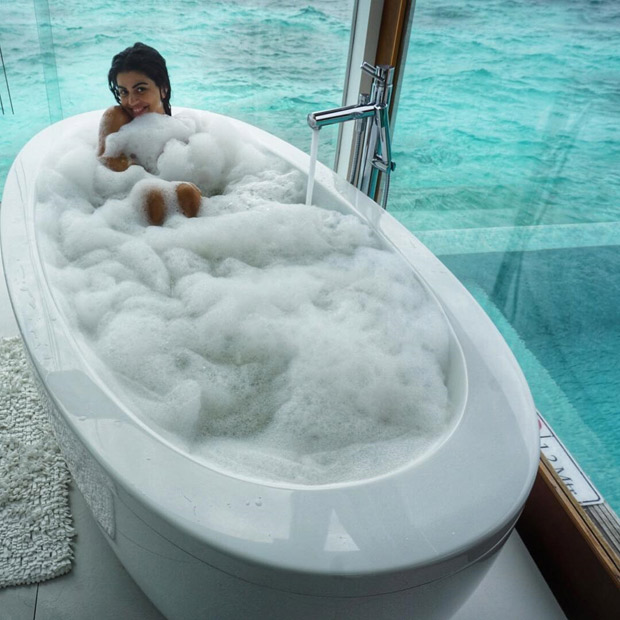 Over the past few months, we have been informing readers about Shenaz Treasury’s epic vacation in Maldives. The actress, who is easily the most travelled celebrity of Bollywood, had flooded her Instagram profile with updates from her vacation. The pictures featured Shenaz Treasury looking smoking hot as she enjoyed the beach country. Also, the pictures were clicked in picturesque locations that made even the travel buffs happy.

Shenaz Treasury is back in New York and yet, her mind and heart is still in Maldives. Even months after her trip, she’s posting pictures of this holiday that shows how much she enjoyed at the beach paradise. Yesterday, she posted another image which is sizzling hot. It shows her immersed in a bath tub which is filled with foam and water. In the background, one can see the clear blue sea which looks heavenly. The next moment, it also makes you think how on earth does this bathroom have transparent glass from wall to ceiling on all its three sides?! Nevertheless, Shenaz is happy with this bathroom and the experience, which is evident from the cute smile that she’s sporting.

On the film front, Shenaz Treasury was last seen in a miniscule role in Tiger Shroff-starrer Munna Michael. However, she is expected to have a significant part in Akshat Verma’s Kaalakaandi, co-starring Saif Ali Khan and Akshay Oberoi. It will release on January 12, 2018. She has also made waves in Hollywood and was recently seen playing a supporting part in The Big Sick, which released a month ago. She has also made a mark in American television with shows like ‘Brown Nation’ and ‘One Life To Live’. Recently, she signed yet another Hollywood film titled My Cousin Sister’s Wedding, co-starring George Wendt, who has starred in the famous sitcom ‘Cheers’.