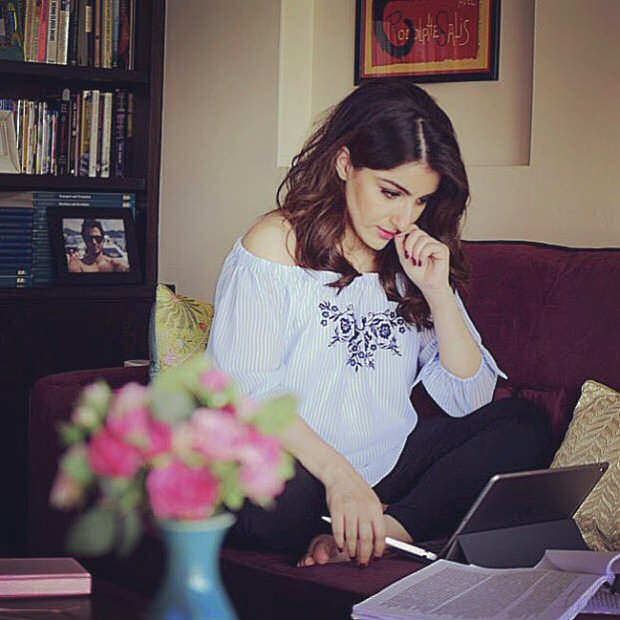 Soha Ali Khan might not be doing plenty of films but she surely remains in news. It was revealed in June this year that she is expecting her first child, which created excitement among Bollywood lovers. Before that, it also came to light that not just her first baby, but she’ll also be delivering her first book this year. The book has been named ‘The Perils of Being Moderately Famous’ and will be published by Penguin. This announcement was made in January 2017 and readers were promised a great collection of humorous and even bizarre stories of her life as a princess and being a ‘moderately famous’ celebrity. She also revealed that people should not read this book to find out secrets behind her brother Saif Ali Khan’s wife Kareena Kapoor’s glowing complexion or how Saif prepares for action in his films. But she promised that there would be passing references about them, as and when required.

Soha Ali Khan took to Twitter two days ago to share an interesting picture. It shows her working dedicatedly on her book. She is wearing a nice off-shoulder dress and is reading something on her laptop. She is seated on her sofa and tons of pages can be seen lying next to her laptop. Interestingly, a hot picture of her hubby Kunal Kemmu can be seen in the background.

On the film front, Soha Ali Khan was last seen in the long-delayed film 31st October, co-starring Vir Das. In the same year, 2016, she essayed a supporting part in Sunny Deol-starrer Ghayal Once Again. Last year, she also announced that she and Kunal Kemmu have got into film production and are making a biopic on the reputed veteran Ram Jethmalani. This year, they faced a legal issue after a producer, Raj Khan, claimed that it was he who had rights to make a film on Ram Jethmalani. Ram Jethmalani's son, senior advocate Mahesh Jethmalani, however rubbished these allegations and nothing much was known about this case after that.